The 26-year-old was speaking about ‘Compromise’, his collaboration with Rema, during a chat with Ebro Darden on Apple Music 1. 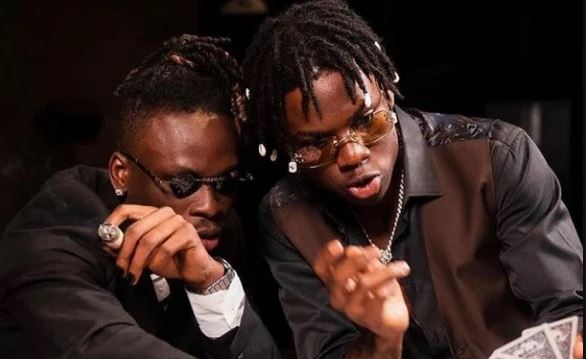 Popular Nigerian singer, Fireboy, has claimed that he and his colleague, Rema are the leading artistes of their generation.

The 26-year-old was speaking about ‘Compromise’, his collaboration with Rema, during a chat with Ebro Darden on Apple Music 1.

Fireboy said the pair decided to work together so their fans wont be able to stir up a superiority rift between them.

He added that it was only right that they work together in order not to repeat the mistakes of their predecessors.

“Myself and Rema are like the two leading artists of our generation, without a doubt,” he said.

“We came together and realized that, “Yo, instead of giving these fans what they want, which is beef, let’s collaborate.” We don’t want to repeat any mistakes from the past; we just want to make money.

“The fans are still doing their stuff. They’re relentless, but we will continue to show love because that’s the only way.

“We are too advanced for this stuff, so we came together, and we want to really give them the obvious club banger that they want.

“We will come together and make proper, proper music, and that’s what we did. We have other songs that are immediate club bangers, but they did not fit into the vision that I had for this album.

Speaking about his widely accepted song, Fireboy said he was getting close to depression when he recorded ‘Peru’.

“The word “Peru” is an allusion to a friend of mine, also an artist, Peruzzi. He has used this tagline in his songs, so I just used it as… it was like a pun, wordplay kind of thing,” he said.

“I was just really telling the story of a young boy who would find himself in a place that he’d never been before. I recorded that song because it was my first time in the United States and I just got off writer’s block.

“I just came back from Miami, where I had the most beautiful time at a strip club. I think I was near depressed, and I just got to the United States, and I just was like, “Wow.” I just made that song out of that feeling, so I think that’s the most spontaneous song I ever made. It was like a 45-minute freestyle.”

Last year, the singer, who featured Ed Sheeran in the remix of ‘Peru’, also revealed that he was tipsy the night he recorded the hit single.

On his album title ‘Playboy’, Fireboy said: “I’ve always been a homebody. I’ve always been a reclusive, chill person. But I decided that I needed to come out of my shell and actually face the reality that is my life right now.

“I’m a superstar. I need to enjoy my superstardom. I need to embrace the reality that is my life right now. That’s what it’s about. I’m coming out to play, Playboy.