Ewa, 30, was paraded alongside three members of his gang, whom the police identified as Emmanuel Angase, Innocent Kingsley and Timi Werikumo. 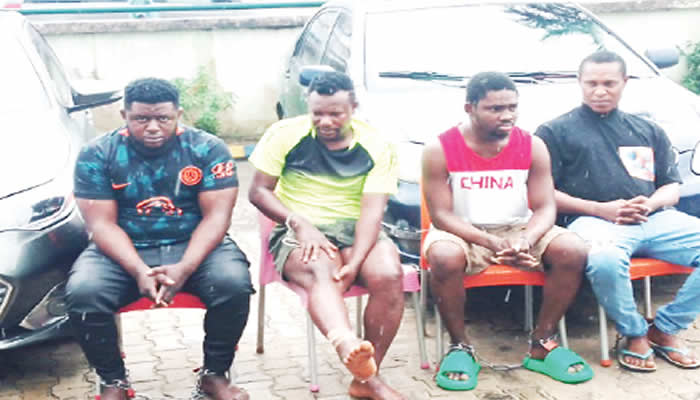 A suspected kidnap kingpin, John Ewa, alias John Lyon has said he didn't know that his gang members kidnap people for ransom.
He made the statement while being paraded by the Bayelsa State Police Command on Monday at the Police Officers Mess, Yenagoa.
The command also paraded no fewer than 10 other suspects, who were arrested for crimes bordering on alleged cultism, murder, armed robbery, unlawful possession of firearms and pipeline vandalism.
Ewa, 30, was paraded alongside three members of his gang, whom the police identified as Emmanuel Angase, Innocent Kingsley and Timi Werikumo.
The state Commissioner of Police, Ben Okolo, said they were nabbed for allegedly kidnapping one Akeem Olushola on December 8, 2020, and Danjuma Emeje on June 30, 2022.
He said Ewa, Angase, Kingsley and Werikumo were apprehended “through painstaking investigation,” while another suspect, Gbalipre Gamage, was at large.
Okolo said, “This gang has been responsible for over 10 high profile kidnappings in the state over a period of seven years.
“On December 8, 2020, one Akeeb Olushola, 48, the manager of a new generation bank was kidnapped at his residence at Old Commissioners Quarters, Opolo. He was released on December 12 after paying a ransom of N80m.
“Similarly, Danjuma Omeje, 41, the manager of a new generation bank in Yenagoa was kidnapped at his residence at Okaka, Yenagoa, on July 30, 2022. He was released on July 14, 2022, after paying a ransom of N60m – N30m cash and US dollar equivalence of N30m.”
He noted that Ewa was known for his flamboyant lifestyle on social media, adding that he confessed to the kidnap of Olushola, Nancy Keme Dickson (on December 26, 2015), Chinonso Eze, and other Igbo businessmen.
The police commissioner said the suspects would be charged at the conclusion of investigation.
In an interview, Ewa said he was involved in the abduction of Olushola and Omeje, but claimed he was not aware his gang members were engaged in kidnapping.
He, however, said he showed the gang members the Yenagoa homes of the two victims and that he knew Omeje while working in his bank as a cleaner before he resigned in 2003.
“We were just driving and I showed them. I said, ‘This is my former boss’ house’. That was it,” he added.
The suspect said he received N1.5m and N3.5m from the ransoms paid by Olushola and Omeje, respectively.
Angase also confessed to his involvement in the kidnap of Olushola and Omeje.
Top Stories