A retired Justice of the Supreme Court, Suleiman Galadima, who led the panel recommended the dismissal of 25 officers on Tuesday. 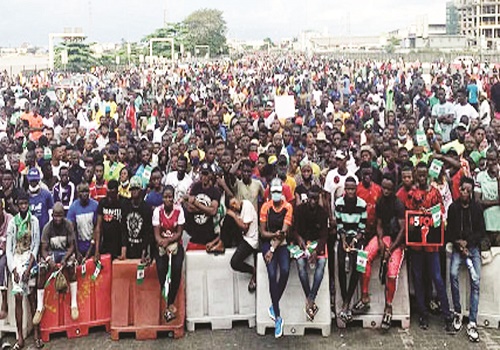 The dismissal of 25 police officers has been recommended by the Independent Investigative Panel on human rights violations by the defunct Special Anti-Robbery Squad and other units of the Nigerian Police Force (IIP-SARS).
This is as it found 72 police officers culpable.
A retired Justice of the Supreme Court, Suleiman Galadima, who led the panel recommended the dismissal of 25 officers on Tuesday.
Suleiman urged the federal government to initiate various degrees of disciplinary action against 15 others, whilst it recommended reduction of rank for four officers following their complicity in human rights violations.
Submitting the final report to the Governing Council of the National Human Rights Commission, NHRC, for implementation, Justice Galadima recalled that the panel was inaugurated on October 21, 2020, shortly after youths across the federation protested against rights violations by the defunct SARS.
He said the panel, after its inaugural sitting on November 4, 2020, successfully heard over 200 petitions, despite daunting challenges such as the intervening COVlD-19 pandemic and paucity of funds.
“Here we are today at this epoch-making event to submit the Final Report, after almost two years of hard work and commitments by the Panel.
“It is our fervent prayers that the Federal Government as a matter of urgency look into this Report and our recommendations with a view to implementing it.
“It is suggested that a Victim Compensation Fund be set aside to settle the awards of compensations.
“We further urge the National Economic Council which directed the establishment of the various Panels on Human Rights Violations to further direct the National Human Rights Commission to harmonize these various Reports of all the Panel and urgently submit the same to the Federal Government for quick action”, Justice Galadima added.
On his part, the Executive Secretary of the NHRC, Anthony Ojukwu, SAN, said it was necessary for all the indicted police officers to be held accountable for their involvement in rights abuses.
“In this regard, I welcome the decisions and indictments issued by the Justice Galadima Panel and I want to assure Nigerians and the victims and their families that the National Human Rights Commission will do everything possible to ensure that the decisions are implemented,” he said.
“The National Human Rights Commission also welcomes the recommendations made by the Panel on Police Reforms to ensure effective and human right-centred policing.
“The Commission already has established a reputation as a leading voice on police reforms.
“We will study these recommendations and will work with the Nigerian Police, the relevant Committees in the National Assembly, civil society and development partners to implement these reforms.”
Top Stories