The footballer also revealed that their coaches at the time spoke against it. 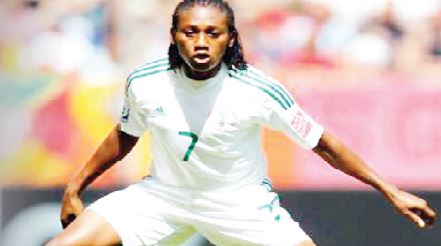 Mbachu who sat for an interview with Punch, noted that l3sbianism was not rampant while playing in the national women's team.

The footballer also revealed that their coaches at the time spoke against it. She said;

''I can’t say if lesbianism was rampant or not during my playing days, but I can confirm that we had it at that time too. But the coaches at that time preached against it and discouraged us from the act, telling us the act is evil and we can’t use that to play football. Every player at that time was informed about it and the disadvantages of practicing l3sbianism. That is why it was not that rampant in our time.''

''No, I don’t agree with that. We have Mercy Akide, a women’s football star and she is married. We have female footballers that are married and are good wives. The likes of Florence Omagbemi, Nkechi Egbe are married and are good wives to their husbands. It depends on what you want, not when you marry the wrong person. Just like every other person in marriage, when you don’t get your own person, it will give you a problem, both of you will not flow very well. But when you marry the person that you love and want to stay with, everything will work well.''

''During my playing days, I never paid attention to fans’ racist chants. Honestly, it does not bother me. My concern is to go to the pitch, play according to my coach’s instructions, do my best and make sure I shine. Racism has returned to football fully and some countries are using that opportunity to abuse players. I will advise players to ignore any form of racist comments because I don’t see racism stopping soon. FIFA is not serious about it; they need to caution the opposing fans, players and the teams. But if the world governing body is serious about it, racism would have reduced drastically in football.''