A witness identified as Tijjani Mustapha, who spoke in Hausa told Daily Trust that Paul consumed the substance because of a bet of N20,000 among some Igbo youths. 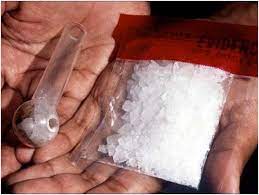 A man has reportedly suffered mental breakdown after consuming large amount of methamphetamine locally known as mkpuru mmiri, in Kubwa area of the Federal Capital Territory (FCT).
The man has been identified as Ikechukwu Paul.
It was gathered that the incident happened on Saturday on Arab Road in Kubwa.
A witness identified as Tijjani Mustapha, who spoke in Hausa told Daily Trust that Paul consumed the substance because of a bet of N20,000 among some Igbo youths.
The bet challenged anyone who could take two cubes of the substance and still remain stable.
Mustapha said, “The bet was all about who could take two cubes of the substance and still remain stable. In less than three minutes after consuming it, Paul became restless and began to sweat profusely.
“Other competitors advised him to try and vomit the substance but he insisted on hanging on, saying he wanted the N20,000 badly. Few minutes later, he started exhibiting the traits of an insane person.”
Speaking further, Mustapha explained that it took the help of four able bodied men to subdue Paul when he started exhibiting erratic behavior.
When his condition refused to improve, they  rushed him to a mental rehab facility where he got treated.
He added that, “When we saw that there was no improvement in his condition after pouring several sachets of water on him, we alerted his family. They rushed him to a private mental rehab facility here in Abuja. I learnt he is getting well.”
Another resident, Badmus Olayinka, said the youths had been engaging in such contests, adding that, “I wasn’t surprised because I knew it would happen one day.”
Top Stories