The 53-year-old woman, who spoke to our correspondent on Monday, said she lost her son and was defrauded while attempting to reclaim the property. 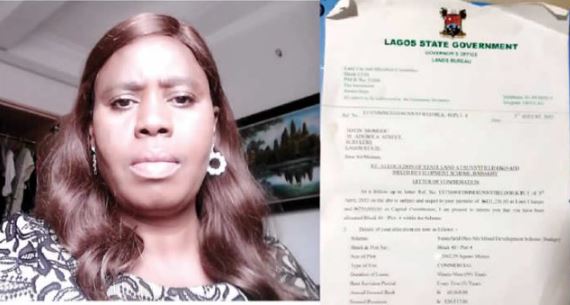 She lamented the alleged refusal of the Lagos State Government to reclaim her property at SunnyField, Oko-Afo community, in the Badagry area of the state.

PUNCH Metro reports that after Momodu was given a Certificate of Occupancy by the Governor’s Office Land Bureau for the 2200 square meters of land in 2012, it was discovered that some hoodlums had encroached on the property.

She said all efforts to reclaim her property had proved abortive.

The 53-year-old woman, who spoke to our correspondent on Monday, said she lost her son and was defrauded while attempting to reclaim the property.

She said, “After paying all my fees and dues for my commercial property at Sunny Field, I obtained my Certificate of Occupancy, only to learn that the land had been encroached on.

“When this happened, I followed the protocol by serving the Permanent Secretary, Lagos State Building Control Agency and the Badagry Scheme Office a request to take ownership of the land. I travelled down to Nigeria and learnt that the building control agency had served the illegal occupants a notice of demolition, a development I was pleased with.

“I contacted the Badagry Scheme Officer at that time, one Mr Ayinde, and he invited me to his office. He also invited an Islamic cleric, who claimed to have built a mosque on a part of my land.

“During our discussion, they pleaded with me to spare his (Islamic cleric) illegal property from being demolished and that he was ready to pay for the land he was occupying. Out of empathy, I said I was ready to give him a part of the land as long as I still have little remaining to build my dream hotel.

“Mr Ayinde told me that they would do the measurement the second day and get back to me. That was the last discussion I had with him. I called him severally, but when he eventually responded, he told me that the Islamic cleric was not one of the occupants, but refused to tell me who the occupants were. He even threatened and told me to be quiet or alternately I could go and report him to the governor.

“Within a couple of weeks, my 16-year-old son, who travelled with me to Nigeria from Florida, died. I returned abroad alone without my son with a heavy and bleeding heart.

“Two workers of the state government also defrauded me of hundreds of thousands of naira while I was trying to pay land use charges on another property.

“I was directed to the commissioner of finance, who never responded to my messages. Then to the legal department, which first told me that all issues would be resolved. But now, they neither respond to any of my messages nor pick up my calls.”

Our correspondent sighted the Certificate of Occupancy, a letter written by the victim to the Lagos State Building Control Agency over the encroachment on her land and a confirmation of payment made for the land by the Lagos State Land Use and Allocation Committee.

PUNCH Metro obtained an email dated August 2022, sent by the victim to the state Governor, Babajide Sanwo-Olu, seeking his intervention in the matter.

She said nobody had responded to her.

When contacted, an officer in the Land Bureau, Ministry of Environment, who identified himself only as Harry, advised Momodu to present her matter before the Lagos State Task Force on Landgrabbers.

He said, “She has called and we have told her what to do. There’s a special committee created by the Lagos State Government on issues like this. We told her to go to land grabbers at their office at Alausa to make the necessary complaints, then we can take it up from there.”