A DSS source told our correspondent that the soldier usually lent kidnappers guns for N200,000 or N300,000. 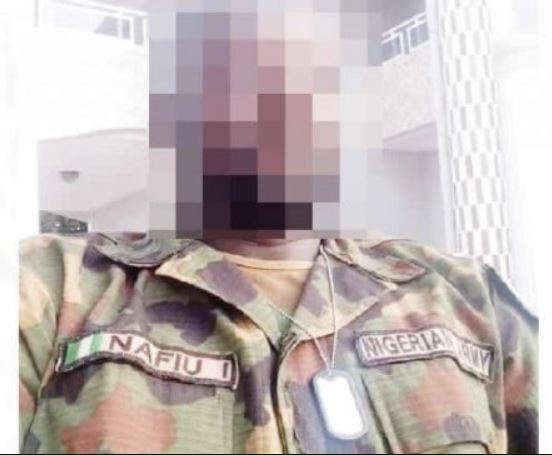 A Nigerian soldier, who has been identified simply as Nafiu, has been arrested.

The soldier who is attached to the Muhammadu Buhari Cantonment, Tungan Maje, Federal Capital Territory, was arrested by operatives of the Department of State Services for allegedly hiring out and selling guns to kidnappers.

PUNCH Metro reports that the suspect was arrested last week at Dankogi Park, Zuba, with the support of members of the Vigilante Group of Nigeria in the area.

A DSS source told our correspondent that the soldier usually lent kidnappers guns for N200,000 or N300,000.

He was reportedly arrested after some kidnappers, who were arrested, implicated him.

“They were asked to contact him for another deal to supply them with AK-47 rifles for N3m and he agreed. But he was arrested by operatives of the DSS with a fully loaded AK-47 rifle which he was about to exchange for N3m at the location where the transaction was supposed to take place in Zuba,” the source said.

The DSS spokesperson, Mr Peter Afunanya, did not take his calls or respond to text and WhatsApp messages from our correspondent despite reading them.