Police Escorted Man To A POS, Withdrew ₦100k In Lagos. How He Got His Money Back


Oluwagbadura said the police officers forced him to transfer the money to them. He called them out on Twitter and recovered his money. 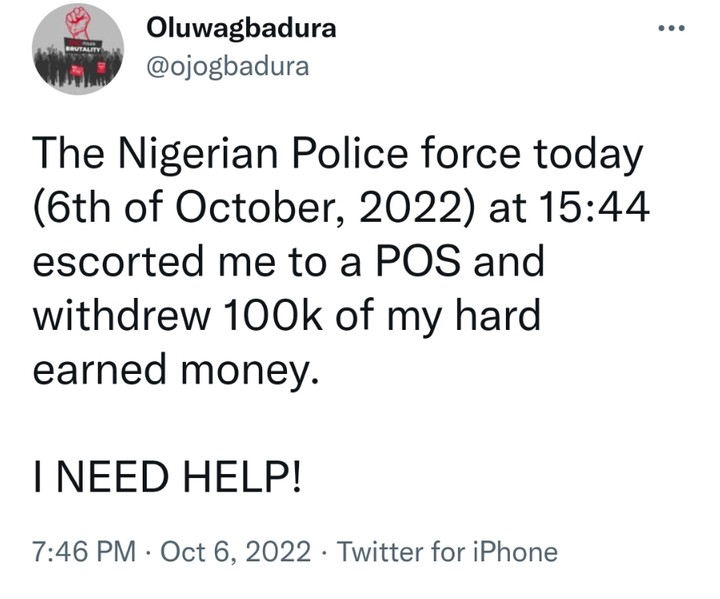 A Nigerian man has taken to Twitter to narrate how he recovered N100,000 stolen from him by Nigerian police officers.
Oluwagbadura said the police officers forced him to transfer the money to them. He called them out on Twitter and recovered his money.
See his story below:
The Nigerian Police force today (6th of October, 2022) at 15:44 escorted me to a POS and withdrew 100k of my hard earned money.
I NEED HELP!
At around 13:45 the Nigerian police stopped me at Soliki Aguda, Lagos, and conducted the usual search. After NOT finding anything on me, they proceeded to seize my phone and company laptop and tagged me a yahoo boy. My crime, they said, is that I do not have an ID card as a freelancer.
They searched my phone. They called me a criminal for chatting with my friends on WhatsApp. They threatened to shoot and lock me up!
Next, they took me to their station, just few meters away, then forced me to admit to being a criminal. I refused.
They then asked me to write a statement and at the end I signed papers to bail myself. I transferred 100k to the POS vendor, and then paid 2k naira for charges. See screenshot.
There were 6 officers.
Names of the officers I could get
⁃AbdulKareem Sulaiman
⁃Ojo ozeigbe - this man threatened to deal with me in cell and nothing will happen
The rest were in mufti including the one who acted as their lead.
All of these things happened at the Police divisional headquarters, soliki aguda.
I need Justice and my money back, please!
@PoliceNG_CRU
@PoliceNG
@BenHundeyin
@LagosPoliceNG
@Princemoye1
@mrmacaronii
@SavvyRinu
@DavidHundeyin
@segalink
Everyone who can see this, please help retweet to get the Police’s attention for justice.
Lagos state PPRO. David Hundeyin, reached out to him via DM
Confirming the recovery of his money, the Nigerian man wrote an appreciation message.
Read below:
First, thanks to everyone who contributed a tweet!
I got my money back COMPLETELY!
Special thanks to @SavvyRinu,
@BenHundeyin, @segalink and the DPO, who was pretty nice. 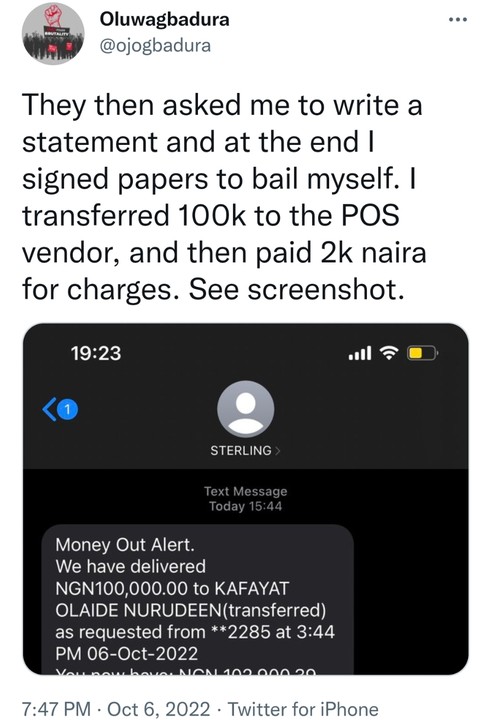 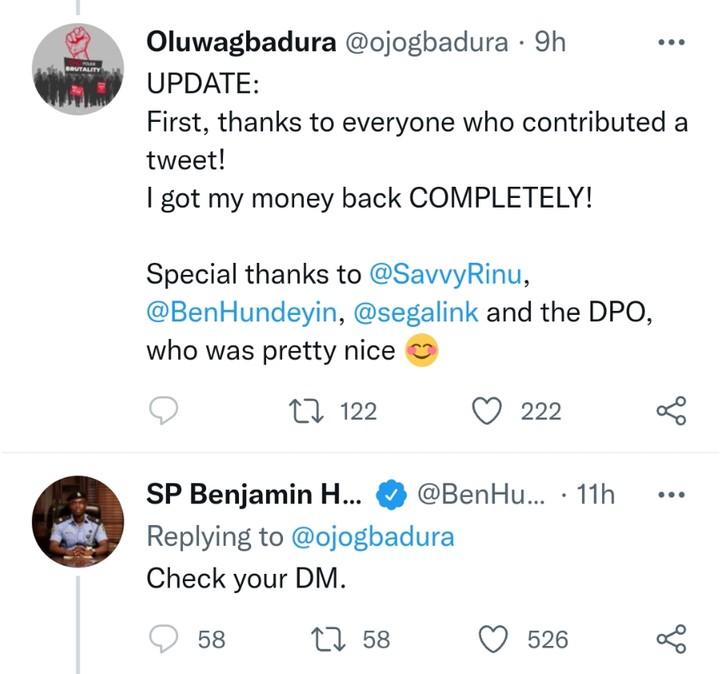