Kenyan Lawmakers Engage In Fistfight Over Control Of Parliament, Attempt To Grab Mace


At 5:20pm, the Serjeant-at-Arms were forced to throw a cordon around the Mace, which is the symbol of Parliamentary authority, the Standard reports. 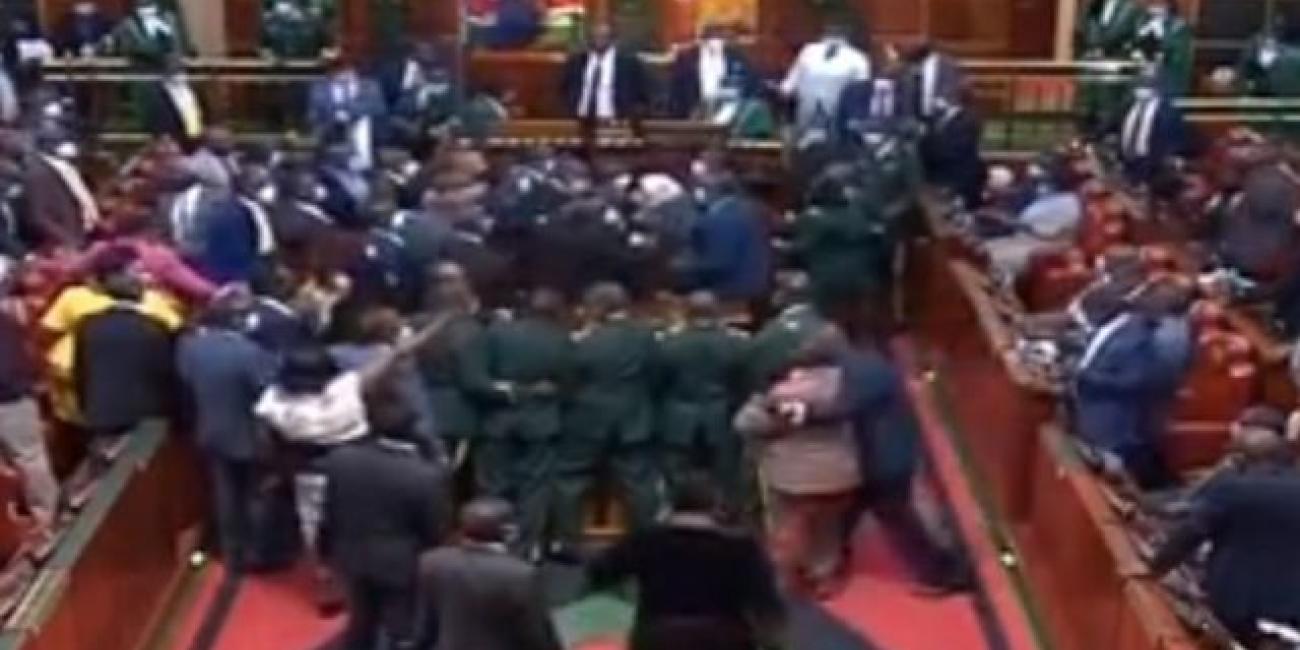 In what will come across as a really startling development, a really vicious fight recently broke out in the Kenyan National Assembly.

The fight broke out on Thursday evening after Speaker Moses Wetangula ruled that the Kenya Kwanza Coalition has the majority number of MPs in the House.

A Member of Parliament tried to grab the Mace to express displeasure at the ruling.

At 5:20pm, the Serjeant-at-Arms were forced to throw a cordon around the Mace, which is the symbol of Parliamentary authority, the Standard reports.

Speaker Wetangula had earlier ruled that the Kenya Kwanza Coalition has 179 MPs to take up the majority leadership in the National Assembly.

The cause of the chaos, was the placement of 14 MPs, who originally belonged to Azimio la Umoja.

Azimio MPs argued that the constitutional timeline allowing for defection had not yet reached, hence making the 14 MPs members of Azimio coalition as per the law.

Speaker Wetangula, however, observed that coalitions are not “cast in stone”, and that the membership can change before or after elections.

“Coalitions are not cast in stone and are an evolving arrangement which can occur both prior to and after the elections,” he said while reading his ruling.

With the 14 MPs removed from the Azimio tally, the coalition’s number dropped from 171 to 157.

With the ruling now made, Kikuyu MP Kimani Ichung’wah will be the Majority Leader in the National Assembly, deputised by Kilifi North MP Owen Mbaya.

Wetangula ruled that the Azimio la Umoja-One Kenya Coalition will take up Minority Leadership positions in the National Assembly.

As a result, Ugunja MP Opiyo Wandayi, who had been proposed for the Majority Leader position, will serve as the Minority Leader in the National Assembly. His deputy will be Kathiani MP Robert Mbui.

The chaos targeting the Parliament’s Mace threw the House into disarray on Thursday evening, with the live broadcast of the event discontinued.

It is associated with the authority of the Speaker and the House as a whole.

When the Speaker is officiating over the House, the Mace ought to be in its proper place on a table, lying horizontally, with the larger end that bears the Coat of Arms facing the right-hand side of the House as viewed from the Speaker’s chair.

If the Mace is stolen or removed from where it should be, the proceedings of the House are considered unofficial.