The attacks come a day after Russia launched over 80 missiles on Ukranian cities including the capital Kyiv killing over 15 people as at press time. 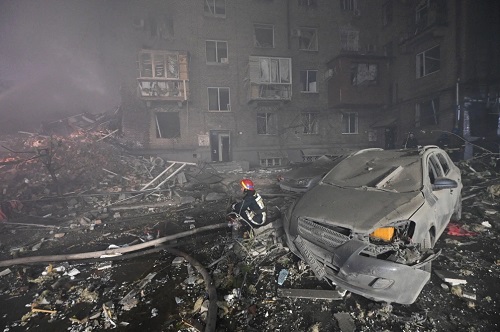 The Ukrainian military has begged for modern air defense systems from the United States.
This comes after it intercepted 18 cruise missiles on Tuesday morning, October 11, in two waves of attacks from the Russian military.
The attacks come a day after Russia launched over 80 missiles on Ukranian cities including the capital Kyiv killing over 15 people as at press time.
The Air Force Command of the Armed Forces of Ukraine said it “shot down” four missiles around 9 a.m. local time, and a further 14 between 9.30 a.m. and 1 p.m. local time.
President Volodymyr Zelensky is appealing to Ukraine’s allies for more air defense equipment.
“Air defense is currently the number 1 priority in our defense cooperation,” he said on Tuesday,  after a call with US President Joe Biden.
Zelensky met with Ukraine’s Defense Minister, the Commander-in-Chief of the Armed Forces and other government and military officials on Tuesday and said his country needed modern air defence systems.
“Those present … emphasized the urgent need to provide the [Ukrainian] army with modern air defense and missile defense systems,” his office said on Tuesday, October 11.
Russia invaded Ukraine on February 24 with plans to topple the Zelenskyy led government but it's plans have so far failed with Ukraine recapturing territories in the South and East since September, spurring Russian leader Vladimir Putin to carry out an illegal annexation and threaten use of nuclear weapons.
Top Stories