Enenche, who appeared as Defence Spokesman, was addressing a press conference after the October 20, 2020 incident, and had said, “These videos were cropped and photoshopped. 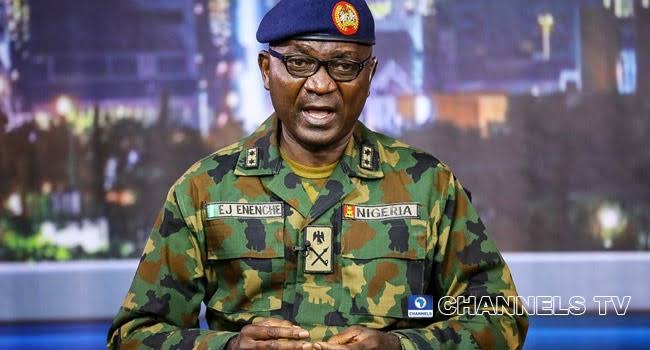 Criticisms have followed the appointment of Major General John Enenche (retd.) as one of the 1,234 members of the presidential campaign council of the Labour Party standard bearer, Peter Obi.
Enenche had described the Lekki shooting incident as being “photoshopped” and “cropped”, sparking reactions from youths who make up a high percentage of Obi's supporters.
Youths lashed out at Labour Party over the appointment because of Enenche's alleged role in the defence of the Lekki shooting by the Nigerian Army on October 20, 2020, during the popular #EndSARS protest.
Enenche, who appeared as Defence Spokesman, was addressing a press conference after the October 20, 2020 incident, and had said, “These videos were cropped and photoshopped.
“If not that I am not permitted, I would have forwarded it to you. Up till this morning, I got analyst to analyse the video and they said it was cropped and put together,” he said in the now trending Arise TV video.
Reactions below:
Twitter user, @I_Am_Ilemona, said, “Maj. Gen. John Enenche (retd), who appears on the Labour Party PCC as representing the North-Central, once called the Lekki massacre “photoshopped.”
“His appointment, barely 10 days to the second anniversary of the Lekki massacre, should raise very serious concerns for everyone. #EndSARS.
@AjeboDanny, said, “After seeing John Enenche, an army spokesman on the Labour Party campaign council, I now regret the way i have supported Peter Obi, and will now channel all my strength, time and money into supporting Peter Obi aggressively and ensure he wins.
@Egi_nupe_ tweeted, “MC Olumo during the rally for BAT(Tinubu) in Lagos said nobody died at Lekki during #EndSARS and we all know what happened on Twitter that day. I want to see what will happen to Maj Gen John Enenche (retd) that called Lekki Massacre “photoshopped” but his name is on the LP PCC.
@Esteembehemoth also said, “I am of the opinion that Major Gen. John Enenche (retd.) should be made to either tender a public apology for the role he played during the #EndSars struggle or be forced to resign.
Anything else other than this is like spitting on the graves of those who lost their lives on 20:10:20.
Top Stories