The act carried out at Onitsha South Mass Transit bus park, opposite Holy Ghost Cathedral, Enugu attracted onlookers who filmed the bizarre act , while some concerned individuals attempted to put out the raging fire. 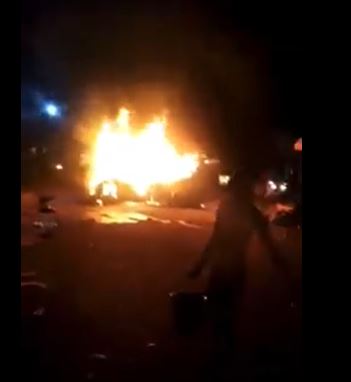 A Nigerian man has set his own car on fire in Enugu State, startling everybody.

The man, said to be a loyalist to the Indigenous People of Biafra (IPOB) on Thursday night burnt down his Vehicle to celebrate the ruling of the Appeal Court which discharged the leader of the leader of IPOB, Nnamdi Kanu of the terrorism charges levelled against him by the Nigerian Government.

It was reported that the man whose name was undisclosed had earlier made a vow to carry out the act if Nnamdi Kanu is released from detention.  Following Thursday’s judgment the man fulfilled his vow by driving to the location disembarking from the vehicle and setting it on fire after dousing it with Petrol.

The act carried out at Onitsha South Mass Transit bus park , opposite Holy Ghost Cathedral , Enugu attracted onlookers who filmed the bizarre act , while some concerned individuals attempted to put out the raging fire.

It can be recalled that A three-judge panel of the appellate court ruled that Kanu was illegally extracted from Kenya by Nigerian agents in a process known internationally as extraordinary rendition, which rights experts define as an abduction.

The judges held that the Nigerian Government could not charge Kanu for any offence in the country until federal authorities explained how they moved him from Nairobi to Abuja in June 2022.

Reacting to the judgement,  the Federal Government through the Attorney-General of the Federation and Minister of Justice, Abubakar Malami in a statement signed by his spokesperson, Dr. Umar Jibril Gwandu on Thursday explained that the appeal court only discharged Kanu and did not acquit him.

The statement read; “The Office of the Attorney General of the Federation and Minister of Justice has received the news of the decision of the Court of Appeal concerning the trial of Nnamdi Kanu,” the statement said. “For the avoidance of doubt and by the verdict of the Court, Kanu was only discharged and not acquitted.

“Consequently, the appropriate legal options before the authorities will be exploited and communicated accordingly to the public.

“The decision handed down by the court of appeal was on a single issues that borders on rendition.

“Let it be made clear to the general public that other issues that predates rendition on the basis of which Kanu jumped bail remain valid issues for judicial determination.

“The Federal Government will consider all available options open to us on the judgment on rendition while pursuing determination of pre-rendition issues.”

A yet-to-be-identified man on Thursday set his car on fire to celebrate the court order discharging the leader of the proscribed Indigenous People of Biafra, Nnamdi Kanu, of the charges against him. pic.twitter.com/co6AP1GKth