Agu works as a cleaner at Murtala Muhammed International Airport, MMIA, Ikeja. She’s being rewarded for her honesty and integrity in returning $12,200 she found in a toilet at the airport. 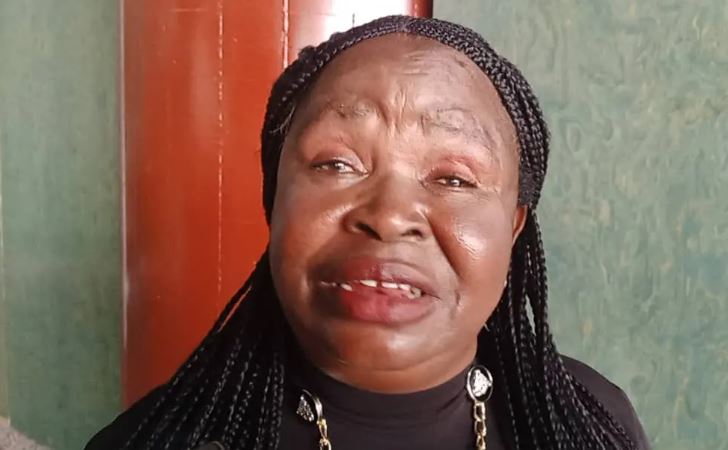 A Nigerian woman, Josephine Agu, was recently honored with a Nigerian national award, Federal Republic Medal II (FRM II) which was conferred on her by President Muhammadu Buhari on Tuesday.

She was honored for her particular act of integrity in the face of a national economic depression at the International Conference Centre in Abuja.

Agu works as a cleaner at Murtala Muhammed International Airport, MMIA, Ikeja. She’s being rewarded for her honesty and integrity in returning $12,200 she found in a toilet at the airport.

President Buhari called them a shining example to the younger generation.

“Despite the present economic challenges, Nigeria still boasts of men and women of integrity; Ms. Josephine Agu, an airport cleaner returned $12,200 found in a toilet at Murtala Mohammed International Airport, Lagos as well as Ogbanago Muhammed Ibrahim, a bank security man who found and returned $10,000. Today, we celebrate their dignity and strong strength of character by conferring National Honours on them,” the President said.

In an interview, Josephine Agus said she had no regrets at all on what she did and vowed to do the same thing again if she ever sees another misplaced money.

“I will not say because of the situation I am in and that I am from a very poor family (I should take the money).

“My advice to Nigerians is that honesty pays better. When you see something that doesn’t belong to you, return it to the owner and even if you didn’t see the owner, there are authorities that you can report because that thing doesn’t belong to you. A good name is better than silver and gold.

“I have made frantic efforts to see my governor, I have even gone to his house to see how he can assist me since 2016 up till date, and he has refused to see me.

“I am very happy for this award that the federal government has given me but in all this, I really need assistance from the government. I need help. As you can see, this is my first pregnancy and all the responsibilities of my elder brother and his children are on me. I need the government to come to my aid.

“I am walking at the airport authority. I was given the job with my Diploma certificate but now I’m running a degree programme and I am in my third year,” she told Vanguard.

Imam Abdullahi Abubakar was also recognized for providing shelter for hundreds of Christians fleeing attacks from Muslim herdsmen who had launched coordinated attacks on Christian farmers in 10 villages in the Barkin Ladi area of Plateau State on June 23, 2018.

“We also have on the list, Imam Abdullahi Abubakar, a religious leader who hid over 262 Christians in his mosque from attacks in Yelwa Gindi Akwati village, in Plateau State. He is a good example of religious tolerance we preach amongst Nigerians. I am excited that he is being honoured today with Member of the Order of the Federal Republic (MFR),” President Buhari said at the award event.

Abubakar narrated what happened and said that he told the unknown gunman that they will have to kill him first before they could slaughter their targets and that was how they all left the people.

”I am very happy that I was able to save the lives of many people and I feel very happy anytime I see them.

“Our heavenly created us in different ways, some are back, others tall and some are white. It is the way he created us and he knows all our needs. So it will be wrong to take any life God created.

“God did not create us for others to kill because in his creation, he created death as well so what I am saying is that, we do not need to kill one another, let’s be patient with each other"