Kanu: FG Appeals Judgment, Case To Be Heard On Monday


Ejiofor noted that, though the Federal Government had the right to appeal, it must first obey the order of the Court of Appeal directing the immediate and unconditional release of Kanu. 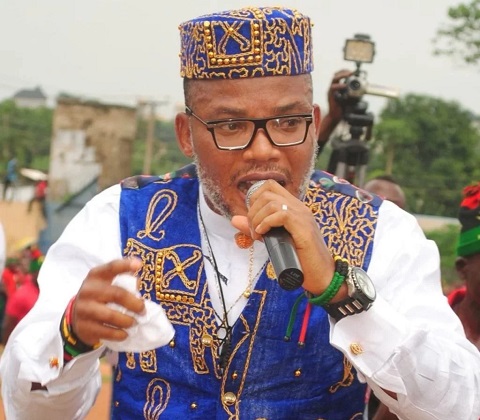 The Supreme Court will hear the Federal Government's appeal against a Court of Appeal order discharging and acquitting Nnamdi Kanu, leader of the Indigenous People of Biafra on Monday.
This comes after FG, issued a ‘Notice of Appeal and Motion for Stay of Execution’ to the judgment of the Court of Appeal freeing Kanu.
IPOB’s counsel, Ifeanyi Ejiofor, stated this in a statement titled, UPDATE ON OUR TODAY’S VISIT TO OUR INDEFATIGABLE CLIENT – ONYENDU MAZI NNAMDI KANU, AT THE DSS HEADQUARTERS, ABUJA”, made available to The PUNCH on Thursday night after visiting Kanu who is still in the custody of the Department of State Services.
Ejiofor noted that a late-night notice was served by the case’s lead counsel, Chief Mike Ozekhome, SAN, on Wednesday night and was due for a hearing on October 24.
Ejiofor noted that, though the Federal Government had the right to appeal, it must first obey the order of the Court of Appeal directing the immediate and unconditional release of Kanu.
He said, “Our strategies towards a successful upsetting of the efficacy of these processes as it affects Onyendu’s unconditional release were discussed with him, which strategies were all acceptable to him, particularly now that the Motion for Stay of Execution was fixed for hearing on Monday, being the 24th day of October 2022.
“Though the FGN’s right of appeal is a Constitutional Right, it is our firm contention that the FGN must, first and foremost, obey the Order of the Court of Appeal directing for the immediate and unconditional release of Onyendu. The FGN has been in contempt of the positive Orders of the Court made since October 13, 2022, by the Court of Appeal, which Orders clearly discharged Onyendu and prohibited the FGN from further detaining him and/or subjecting him to any further prosecution or trial.
“The law is settled that a party who is in disobedience of a Court Order cannot be entitled to, or be granted the indulgence of the exercise of the equitable discretion of a Court of Law for Stay of Execution of the same Order the party is in its contempt.
“Onyendu’s legal team, eminently led by our erudite Silk, Chief Mike Ozekhome, SAN, is ever ready to literally remove the carpet from under their feet in Court, come October 24, 2022.
“There is no doubt whatsoever that this grossly incompetent application for Stay of Execution is to enable the lawless DSS to gain more time with the continued detention of Onyendu, but their evil plan is dead on arrival because we are equal to the task!
“The only valid option available to the FGN now is to obey the Order made by a very Superior Court of Record, and immediately free Onyendu unconditionally.
“Onyendu is strongly convinced that our landmark victory resonates with the age-long testament that the Court is the last hope of the common man. He is firm in his conviction that this landmark victory has come to stay, and his freedom is sacrosanct.
“Umuchineke are strongly assured that the present development is nothing to worry about. The Judgment of the Court of Appeal freeing Onyendu has held the FGN in a vice-like grip, there is no chance whatsoever of extrication. Onyendu’s freedom is sacrosanct and the sanctity of the Court’s pronouncement must be respected by the FGN, and the time is now!
“Onyendu extended his profound gratitude to you all, UmuChineke, while encouraging you all to remain fervent in your supplications and prayers, as this travail will soon be a thing of the past. There is already light at the end of the tunnel,” part of the statement read.
Top Stories