According to eyewitness accounts, the teenager jumped into the river after receiving a phone call at about 4:00 p.m. 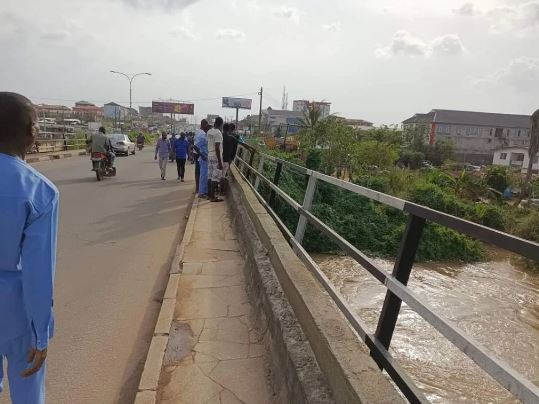 A young Nigerian woman who is yet to be identified , has killed herself in Osun State.

The lady committed suicide by jumping from the Gbodofon Bridge into the Osun River on Thursday in Osogbo.

According to eyewitness accounts, the teenager jumped into the river after receiving a phone call at about 4:00 p.m.

According to them, the lady had alighted from a commercial motorcycle on getting to the bridge along the Gbongan-Osogbo road.

An eyewitness, Tosin Olaleye told DAILY POST that the lady was having a conversation with someone on the phone when she got to the bridge.

“We saw her talking on the phone and when she alighted, she dropped the phone into her purse.

“She dropped her bag and the next thing we noticed was that she jumped straight into the river.

“We were all shocked. Before anybody could do anything, she was already in the river and we did not see any trace of her again,” the source said.

She disclosed that after other passersby raised the alarm, she and other witnesses to the incident quickly contacted the Federal Fire Service and they arrived at the scene within minutes but there was little they could do as several minutes of rescue efforts proved abortive.

“After several minutes of fruitless search, the fire fighters left the scene without recording any success. The water level has increased because of the rain and that also made it more difficult for her to be found. No one could enter the river because of its intensity,” she added.

The Federal Fire Service, Osogbo office has not given an official reaction to the incident.