Breakfast Reach Me Too - Nollywood Actor, Gideon Okeke Announces Separation From His Wife


Although troubles in their marriage had surfaced earlier in August, 2022, the actor confirmed the separation today. 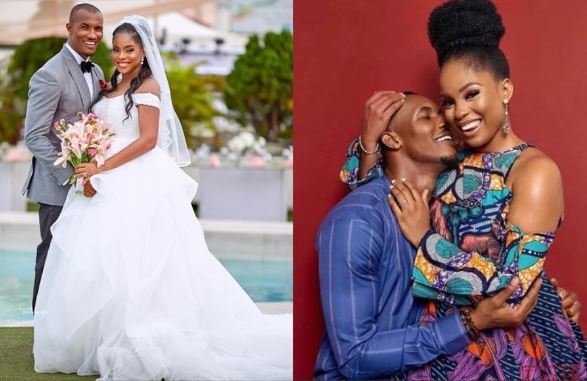 Gideon Okeke, a popular Nollywood actor has announced that he and his wife have parted ways.

He explained that he has separated from his wife Chidera, after four years of marriage.

Okeke made the announcement on his Instagram page via his InstaStories on Sunday. Although troubles in their marriage had surfaced earlier in August, 2022, the actor confirmed the separation today.

In his post he said, “You wouldn’t believe it if I told you that I’m separated from my marriage right?

“No you wouldn’t. So grab a seat. It is in the interest of clarity and clear conscience that this becomes imperative. But yea…’breakfast reach me too. Las las’.

“It’s been a hard hot pill I’ve had to swallow and boy, it sure humbles one. This public service announcement wouldn’t be so important (to me), but for the trap that I find fame to be sometimes. Gagged.

“But as I look to the future. I pray for my boys. Such lovely boys. Please put us all in your prayers, no pity party. They need mum and dad sane, sound and strong for the fulfillment of their best interests and we are working towards it. Hard! I thank God. And I thank you for rooting for us. One life, many stories.”

Okeke urged concerned persons not to reach out, as himself and Chidera end things.

“Please don’t call, don’t text, as we work our way to a final dissolution. These processes take a toll on one as you may know. God bless you all,” he said. 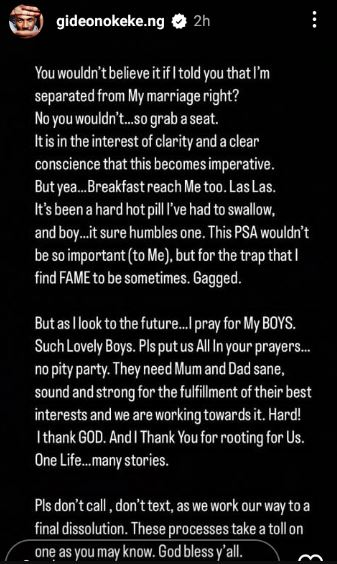 The pair had two boys together and were married in 2018.