It was learnt that the driver lost control and rammed into the wall, hitting another commercial bus loading passengers. 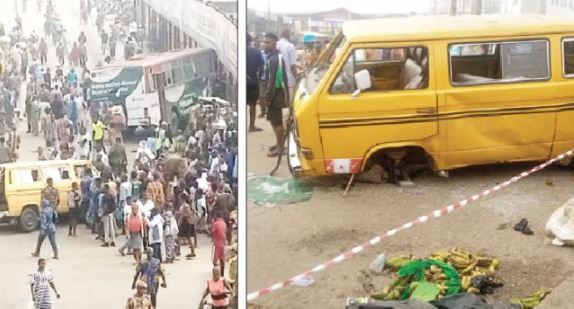 An accident in Lagos involving a a Bus Rapid Transit vehicle has claimed lives.

Three persons were confirmed dead and several others injured on Wednesday when the Bus Rapid Transit vehicle rammed into a market fence at Alapere in the Ketu area of Lagos State.

PUNCH Metro reports that the BRT, with number plate KSF-940XX, had a brake failure when the incident happened around 7am.

It was learnt that the driver lost control and rammed into the wall, hitting another commercial bus loading passengers.

An eyewitness, Chukwuemeka Sunday, said the BRT vehicle crushed a woman who was coming from the market, an apprentice trying to cross the road and a wheelbarrow pusher.

The victims were said to have died on the spot as the BRT driver fled the scene.

The eyewitness also said several others who were injured were taken to a hospital for treatment.

Our correspondent gathered that another BRT vehicle with the number plate, GGE-405YF, driving towards a BRT lane, was also affected.

When our reporter visited the scene of the accident, policemen from the Alapere and Ketu divisions, officials of the Federal Road Safety Corps, and the Lagos State Traffic Management Authority were seen controlling the traffic.

Another eyewitness, Kelvin Olabode, lamented the condition of BRT vehicles in the area.

He said, “That BRT bus had a brake failure and rammed into people standing to board buses to Ikorodu. Three people died instantly and several others were injured. One of the deceased persons was crushed beyond recognition, with her brains splashed on the ground.

“Not all these BRT buses have brakes. They are used to dragging the road with smaller vehicles. Everyone is hustling like them. I saw the wheelbarrow pusher this morning hustling for his daily bread, but now he is gone.”

A witness, who did not mention her name for personal reasons, identified one of the deceased as her neighbor, Iya Bolu.

She noted that they were both coming from the market and she advised the victim to alight with her at Garage Bus-Stop, but she refused, saying she would find a bus faster at Ketu Bus-Stop.

“She then got a wheelbarrow to help her push her oranges and bananas to the bus stop, where she was hit by the bus. I have informed her husband,” she added.

Our correspondent observed that the father of the apprentice, identified as Lekan, broke down in tears on arriving at the scene.

“Death has wasted all my effort in life,” he muttered in Yoruba.

“The completion of his apprenticeship as a butcher was supposed to be on November 19. Death has wasted all my efforts and the money that I put into Lekan’s life,” the distraught father added.

The LASTMA Director of Public Affairs, Taofiq Adebayo, said the accident occurred around 7am and claimed three lives.

He said, “The accident involved a red BRT bus which had a brake failure, and a Volkswagen, popularly called Danfo.

“Preliminary investigation shows that the accident took the lives of three pedestrians waiting to board buses around the Ketu axis.

“The three dead persons were taken by the State Environmental Health Monitoring Unit to a mortuary and the eight people seriously injured were taken to a general hospital by the Lagos State Ambulance Service.”