No fewer than seven people were killed, including three police officers during the incident. 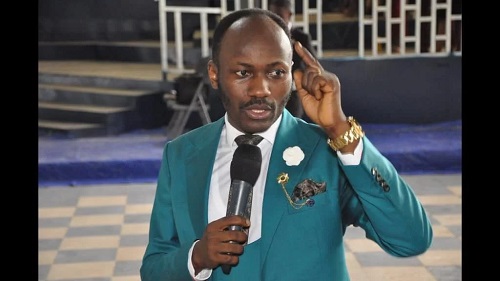 The General Overseer of Omega Fire Ministries, OFM, Apostle Johnson Suleman has revealed why assassins were sent to kill him.
DailyPost reported that Suleman said some ministers uncomfortable with his condemnations of killings in Nigeria had offered him a bag of money.
Addressing his members, the clergyman said the ministers vowed to come after him for refusing their offer.
Suleman said: “Some ministers called me to Abuja after I spoke against the killings on a national scale, and they sat me down, threw a bag of money, and they said to me, take this and shut up.
“They threw out an AK-47, they threw out a newspaper, and they said take the money or you go by these two.
“I told them that I did not understand what they meant. They said if I did not do that, they would make sure that in this country, I don’t hold the microphone again.
“I said to them, I never knew what I said was actually a big deal; now I want to start talking. I said if you wanted to come for me, please you were very free to bother yourselves, because I would keep talking, and I kept on speaking.”
A few days ago, Apostle Suleman was attacked by unknown gunmen in Auchi area of Edo State.
No fewer than seven people were killed, including three police officers during the incident.
Reacting, Suleman said he knew those after his life but would not disclose their identities.
Suleman also denied allegations on social media that he used the officers killed during the attack for ritual.
Over the years, Apostle Suleman has been subjected to several controversies, ranging from sexual relationships with women to rituals.
Top Stories