The Nigeria international who joined Napoli from Lille just over two years ago for an African record transfer fee recorded the landmark feat in the first half of Napoli’s 2-1 win over Atalanta in Bergamo. 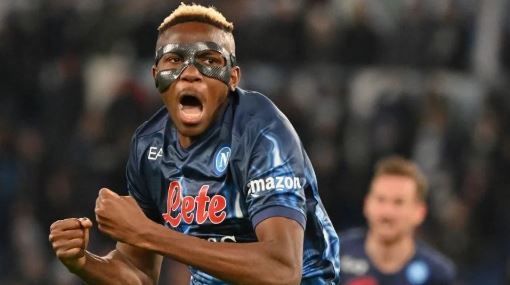 Victor Osimhen has achieved an incredible feat in Seria A.

Osimhen’s 32nd Serie A goal for Napoli on Saturday saw him emerge as Nigeria’s most prolific goal scorer in the Italian championship ever, The PUNCH reports.

The Nigeria international who joined Napoli from Lille just over two years ago for an African record transfer fee recorded the landmark feat in the first half of Napoli’s 2-1 win over Atalanta in Bergamo.

His compatriot, Ademola Lookman, had shot the hosts into the lead from the penalty spot in the 19th minute after Osimhen handled the ball in the box, but he turned it around with a goal rising higher than La Dea’s defence line to head home the equaliser four minutes later.

He broke away from Merih Demiral down the right and pulled it back for Eljif Elmas to take a touch and score from 10 yards in the 35th minute as Napoli fought back to win this top of the table showdown and go eight points clear.

Before the match against Atalanta, Osimhen was tied on the same number of goals (31) as Simy Nwankwo.

But with his goal on Saturday, the 23-year-old has surpassed the former Crotone hero.

At the Stadio Arechi stadium in Italy, David Okereke scored his third league goal of the season for Cremonese who played out a 2-2 draw away at Salernitana.

Krzysztof Piatek opened the scoring for the host in the third minute – pouncing on a deflected Antonio Candreva cross for the fastest ever Serie A goal scored by Salernitana after two minutes and 30 seconds, but Okereke thumped in a wonderful volley from a Frank Tsadjout knockdown.

Lassana Coulibaly drilled in from a tight angle, but Cremonese got a penalty for Federico Fazio’s late lunge. Sepe saved the Daniel Ciofani effort with his foot off the line, so it was retaken and another save still couldn’t prevent the equaliser.