The fraudster was driving to a destination in Obiaruku around 5.20pm on Friday, October 28, when five policemen, who were on a stop-and-search duty, flagged down his vehicle. 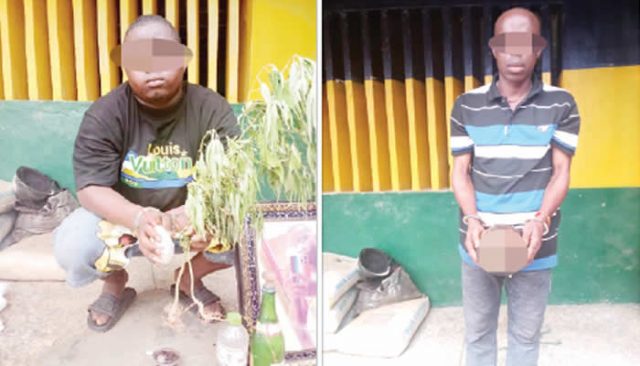 An internet fraudster aka yahoo boy has been arrested alongside a herbalist.
The duo were arrested with human parts by policemen attached to the Obiaruku Police Station.
The human parts were recovered at the herbalist’s place in Obiaruku, in the Ukwuani Local Government Area of Delta State.
PUNCH Metro gathered that the fraudster was driving to a destination in Obiaruku around 5.20pm on Friday, October 28, when five policemen, who were on a stop-and-search duty, flagged down his vehicle.
Instead of parking, the suspect zoomed off, as the policemen, who became suspicious of his action, gave him a hot chase and caught up with him.
A resident, who asked not to be identified for security reasons, said the policemen, while searching the vehicle, found a note specifying the need for human parts.
“The instruction on the note was that the man should provide a human head, hand and leg. After recovering the note, the policemen asked what he wanted to use the specified items for and out of fear, he said it was for something.
“So, the policemen embarked on full investigation by visiting the Obiaruku Police Station to obtain a warrant to search his three-bedroom flat and while searching his house, they obtained another written note requesting the same items in the first written note that was found in his car,” the resident added.
The source said after the policemen found the notes, they detained the suspect and during interrogation, he said Ike requested the human parts.
He explained that the next day, the suspect led policemen to the herbalist’s place, and while searching the premises, a decomposing corpse was found beside a fish pond.
“The herbalist used nylon to cover the corpse and since the corpse was close to the fish pond, nobody perceived the smell because of the odour around the fish pond.
“The policemen took the Yahoo boy and the herbalist to the station and they were transferred to the state command for further investigation,” the source added.
A video clip in possession of our correspondent showed the herbalist unwrapping a sack containing the bones of a corpse.
A human skull was also seen beside the sack in the midst of policemen questioning him over the incident.
In his defence, Ike was heard saying, “It was my child that was buried; I dug the grave and removed the corpse from where it was buried.”
The state police spokesperson, Bright Edafe, did not take his calls and had yet to respond to a text message sent to his mobile phone as of the time this report was filed.
Top Stories