God Has Chosen Peter Obi, There Is Nothing You Can Do About It - Obi's Camp Replies Soludo


According to Obi's camp, Soludo feels he is larger than life and that if it is not him, it should not be anybody. 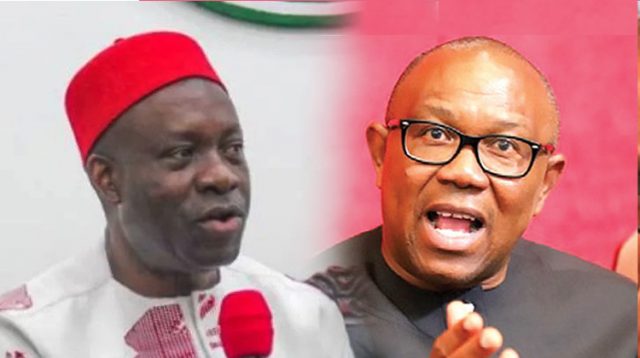 The spokesman for Labour Party Presidential Campaign Council, Yunusa Tanko has reacted to an article by Governor of Anambra, Charles Soludo saying that Peter Obi can't win the presidential election in 2023.
Tanko, accused Soludo of being used by the opposition to scuttle Obi’s presidential ambition.
He said, “Soludo feels he is larger than life and that if it is not him, it should not be anybody. But God has chosen Obi and there is nothing he can do about it. He should just go and lick his wounds.
“The fact still remains that it is Obi on the ballot. He does not have the capacity to determine whether Obi will win or not. As we are seeing it, Obi is winning a landslide victory.”
On whether Soludo has an axe to grind to Obi in the build-up to the 2023 elections, Tanko dismissed the thought, saying the target was to suppress the LP’s growing profile in the region.
“Soludo is just allowing himself to be used. It is an orchestrated attempt to weaken our own base starting from Anambra to other states in the South East. That was the strategy.
“I don’t know why he is trying to risk everything he has for this particular negative cause. But we will rely on the love that would be shown by Obi’s people to triumph during our campaign there,” he said.
The National Chairman of the All Progressives Grand Alliance, Victor Oye, declined comment, saying he didn’t want to be involved in the issue.
Top Stories