The police tendered the evidence after Sani’s neighbour Mustapha Abubakar told the court that Geng-Quangrong was very angry when he visited Sani on September 16. 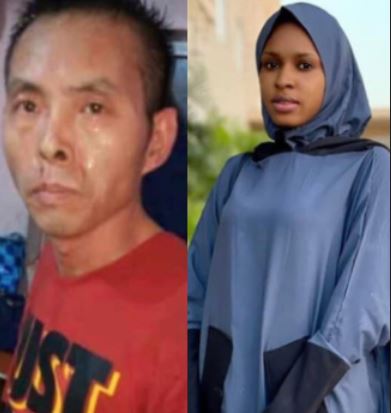 The knife allegedly used by Chinese national, Geng-Quangrong to stab his lover, Ummukulsum Sani was presented by the police on Thursday before the State High Court.

Geng-Quangrong, who lives at Railway Quarters Kano, is on trial for the death of Sani. He was charged with culpable homicide.

The police tendered the evidence after Sani’s neighbour Mustapha Abubakar told the court that Geng-Quangrong was very angry when he visited Sani on September 16.

Led in evidence by the prosecution counsel and attorney general of Kano State, Musa Abdullahi-Lawan, Abubakar said, “I saw the defendant knocking aggressively on the the gate of late Ummukulsum’s house.

“I approached him and told him calm down that the occupants will open the gate.

“At that moment, Frank went to his car and almost immediately started knocking on the gate again. At that moment I left him and continued with my call.”

The witness said a few minutes later, he saw the deceased’s mother outside calling for help.

“She shouted for help saying he wants kill her daughter.

“I entered the house and attempted to open the door but it was locked.

“I jumped through the window and held the defendant by the colar from the back and saw a knife in his hand with blood,” Abubakar said.

The officer said: “On September 16, I was on duty when a case of culpable homicide from Dorayi Babba police station was dispatched to our office at the state CID.

“As the team leader, I asked him what transpired between him and late Ummukulsum, the defendant said she got his number through his friend Asina in 2020.

”The defendant said Ummukulsum told him she wanted to go out with him and he fell in love with her until she got married in 2022.”

The defence counsel, Muhammad Dan’azumi, while cross-examining asked Abubakar whether the door was locked from inside and outside.

Justice Sanusi Ado-Ma’aji ordered the remand of the defendant in a correctional centre and adjourned the matter until Friday for continuation of hearing.