The father of five, who recently revealed that the time has come for him to fulfill his calling as a minister of God, shared a video of a lady’s massive behind on Facebook. 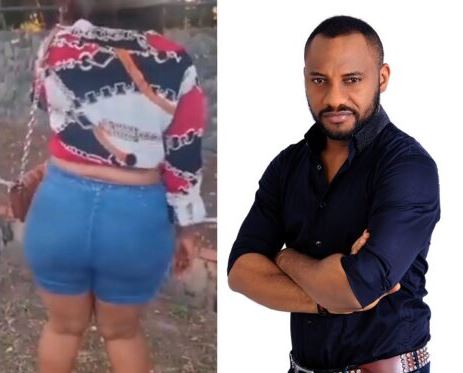 Yul Edochie, the popular Nollywood star, has caused a stir on social media.

The father of five, who recently revealed that the time has come for him to fulfill his calling as a minister of God, shared a video of a lady’s massive behind on Facebook.

Sharing the video, he posed an interesting question to his fans, asking if they could handle a lady with a big derriere like the one in the video.

“Can you handle this, see the effects of big engine.” He captioned the video.

Watch the video below,

Although the video was a skit and apparently posted for laughs, it didn’t sit well with his Facebook followers, and in no time, they trooped to the comment section to drag the “man of God” to filth. See some comments as you scroll.

@Unique Jackie-Maraeze wrote, “When did you turn to this wayward man? You couldn’t stand the stainless look of Aunty May on the internet. You now brought a clip of just but0cks. This man you weren’t like this. Polygamy is not waywardness.”

@Rosemary Sylvia Martins, “E be like say this London May travelled to touch you for bone marrow because what is this”.

@Jenny Apolas, “A man heart n mind is judged by his everyday actions. This is yul mind n heart that is y he went to Judy. ..Judy is so much display private property she models just to attract man of low standards n high sexual eppitte”.