Chukwuma spoke to journalists in Enugu on Monday evening, rating the Buhari administration as a failure in the anti-corruption fight. 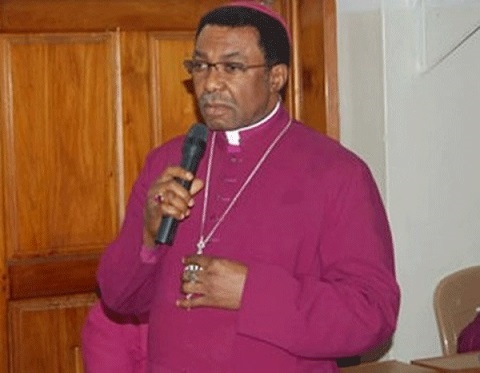 The government of  President Muhammadu Buhari has been rated as the most corrupt in Nigeria's history.
This is the submission of the Archbishop of Enugu Ecclesiastical Province and Bishop, Enugu Diocese, Anglican Communion, Most. Rev. Emmanuel Chukwuma, according to a report by DailyPost.
Chukwuma spoke to journalists in Enugu on Monday evening, rating the Buhari administration as a failure in the anti-corruption fight.
The cleric said it was saddening that a government that was voted into power owing to its promise of coming to fight corruption and improve the economy, had worsened the state of affairs in the country.
He said, “When Buhari was coming in, he promised change, we embraced him, but rather than what was promised to Nigerians, what we are seeing is worse.
“Corruption has gone to a high level. There is too much embezzlement and money laundering under this government.
“Corrupt officials who are indicted and arrested are not being imprisoned, even those that were imprisoned by the last administration have been granted pardon.
“We were told about billions of recovered loot, where is it? That’s why I said the government is too corrupt. They are re-looting recovered money.”
DAILY POST recalls that the Buhari government had earlier in the year granted pardon to two former State governors who were jailed for stealing public funds.
The former governors, Joshua Dariye of Plateau State and Jolly Nyame of Taraba State governed their respective States between 1999 and 2007.
They were among the 159 convicted persons whose pardon was approved by the Council of State in April this year.
Archbishop Chukwuma described the development as a clear indication that the government was not committed to the anti-corruption fight.
He equally lampooned the government over the spiral inflation in the country, lamenting that essential commodities had gone far beyond the reach of the common man.
“Inflation is now too high like never before. A litre of petrol is now sold between N250 and N300.
“Salaries are not being paid; many States are yet to implement minimum wage.
“Brain drain is on the highest level, medical officials especially have all deserted the country and the government is just moving on as though everything is normal.
“The only interest of this government is on taking loans everyday, we don’t know how the debt will be paid; we are not even seeing what they are doing with the loans.
“Oil theft has worsened. The vessel that was discovered, why should it be set ablaze, destruction of evidence. Some people are supposed to be fired for doing that but nothing has happened,” he lamented.
On the 2023 general elections, Chukwuma advised the electorate “to look out for people with pedigree to bring us out of this mess. We are in slavery of corruption, slavery of insecurity, slavery of collapsed education, slavery of inflation and bad economy.
“It is so disturbing, people are even sceptical that the election will not be held. We should pray for God’s intervention.
“All old politicians should step aside, they have nothing to offer. We want a new wine in a new wine skin.”
He, however, charged Nigerians not to despair but to remain prayerful.
“As we begin Advent, approach Christmas and New Year, it has become pertinent for me to release this message.
“Nigerians should move closer to God and trust him for an intervention. Let us work together to make Nigeria great.”
Meanwhile, he also condemned the attack on some communities in Eha-Amufu, in Isi-Uzo Local Government Area of Enugu State, which left several persons dead.
While accusing some security personnel of sabotaging the efforts of Governor Ifeanyi Ugwuanyi, he demanded the immediate removal of the security chiefs in the State.
“Some of these security men are not helping us, they appear to be sympathetic to those killing our people,” he alleged.
Top Stories