2023: Time To Liberate Yourself, Vote Out APC - Atiku To Lagosians


On his party, the Chairman of the Peoples Democratic Party, PDP, Iyorcha Ayu told the gathering that Atiku will make Nigeria the best country in Africa. 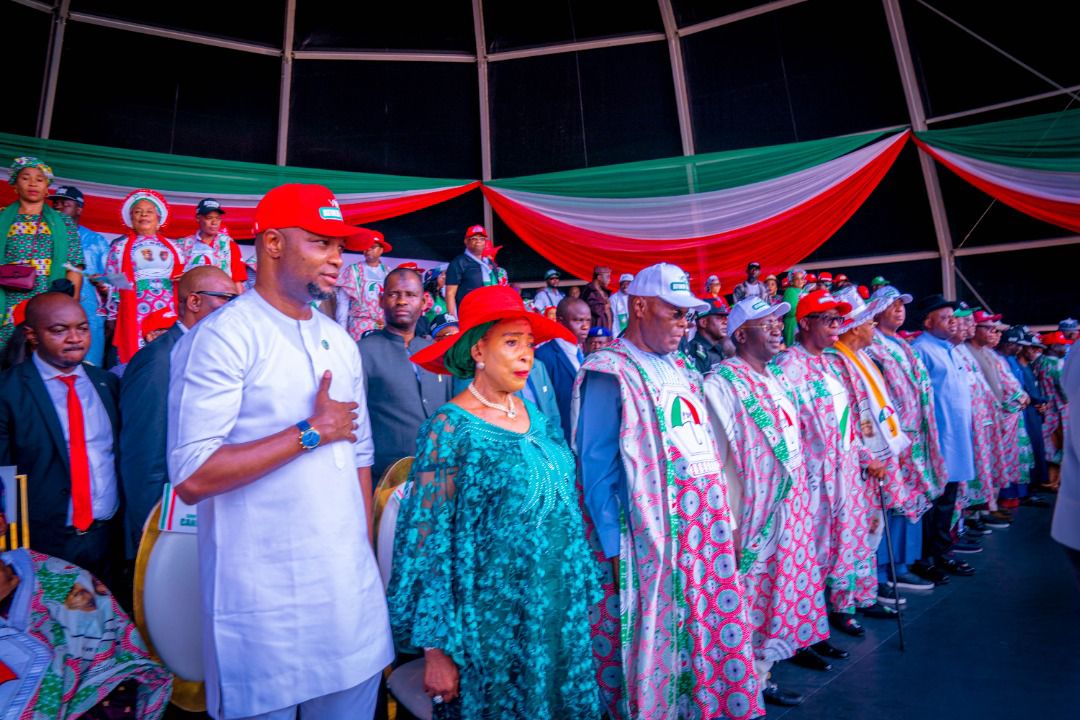 Lagosians have been urged to vote out the All Progressives Congress.
Presidential candidate of the Peoples Democratic Party, PDP, Alhaji Atiku Abubakar made the call at the PDP’s presidential rally in Tafawa Balewa Square, Lagos.
Atiku also discredited APC’s claims of building major infrastructure in the state. He added that only “a single family has ruled the state for 23 years.”
He said, “the Federal government built the third mainland bridge, Agege motor road, and other road infrastructures in the state, the APC govt is lying to you about developing Lagos.
“It is time for you to liberate yourself from a family govt in power for over 23 years, by voting Jandor as your governor”.
The PDP flag bearer also promised to privatize all the refineries to raise $10b for women and youth empowerment in the country.
Further speaking, Alhaji Atiku again reiterated that he would set aside $10b to support youth and women empowerment
He said “I will set aside 10b to empower young men and women. “
“People have asked how I will get the money but If I privatize the Warri refinery and others, I will get the money,” he told the mammoth crowd.
Atiku further emphasized restructuring of the country if elected.
“If I am voted I will restructure the country. For the past 23 years we have been voting one family it is time to liberate ursef and vote Jandor.
Recall that many elder statesmen in the country have called for restructure which some have argued would solve some of the national problems currently facing the country.
Earlier, governorship candidate of the PDP in Lagos, Jandor told the party’s supporters that he will stop all forms is harassment by the NURTW and other miscreants hibernating in all motor parks and garages in the state.
He said, “In the last 23 years we haven’t seen anything in Lagos and it is time for us to have a meaningful government in Lagos by voting me.”
“Poverty rate has increased since Sanwo-Olu took over despite his claims of investment of N10b in the employment trust fund in Lagos.”
“Funke and I have been contributing our quota and employing people, we pay our taxes but Sanwo-olu and his deputy don’t.”
“Let me use this opportunity to tell the people of Lagos that you say the touts are terrorizing you but the govt doesn’t want that stop. As your governor, I will stop all forms of harassment in markets and motor parks and this is our pledge to the people of Lagos, Jandor said.
Speaking also at the rally, the party’s Vice Presidential candidate and governor of Delta, Ifeanyi Okowa told the crowd that, “I know Lagos is ready to deliver a massive vote for the PDP in the 2023 polls.”
“Atiku is acceptable all over the country and he is the one who can deliver to the people. PDP wants to restore the last glory of the country.”
“The resources of Lagos must be used for the people. Not where the rich will become richer and poor poorer. Atiku is the only candidate that can restore the glory of the lost country. Therefore go from door to door and house to house campaign to the people, PDP will restore Nigeria’s greatness, Okowa said.
On his party, the Chairman of the Peoples Democratic Party, PDP, Iyorcha Ayu told the gathering that Atiku will make Nigeria the best country in Africa.
He assured the people of Lagos that if Atiku is elected, he would abolish the multiple taxation system in Lagos.
He said, “Lagos is going to be liberated. We are going to rescue lagos from the hands of people who don’t want the progress of NIgeria. Liberating Lagos is liberating Nigeria.
It is a state that shouldn’t be in poverty. Atiku is ready to liberate lagos, he won’t over taxed you like the multiple taxation going on in Lagos.
He urged the crowd of supporters to “vote Jandor and all our candidates and above all we shall recover the Aso rock”, he said.
Top Stories