According to Mr Moses, his mother told him a Yoruba man, known as Jide Sanwo-Olu, is his biographical father, following his repeated inquiry about the identity of his father. 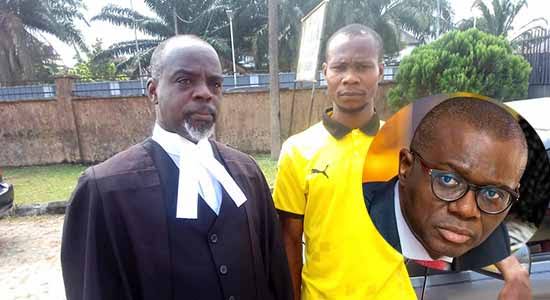 Governor Babajide Sanwo-Olu has reacted after a young man claimed that the Lagos State Governor is his father.
Reacting through his lawyers, Sanwo-Olu invoked the immunity clause to prevent the young man's lawyer from making him submit to a DNA test, according to Peoples Gazette.
Recall that the paternity suit is ongoing at the Effurun Division of the Delta State High Court.
The lawsuit was filed by a 27-year-old man, Emmanuel Moses, alleging that the Lagos governor is his biological father. He alleged that his mother, Grace Moses, told him that Mr Sanwo-Olu sired him. He told the court that his mother and Mr Sanwo-Olu had a relationship between 1994 and 1995.
He submitted a 19-paragraph statement that claimed Mr Sanwo-Olu was a staff of a company operating in Delta from 1994 to 1995, stating that Mr Sanwo-Olu impregnated his mother in 1994, adding that his mother lost contact with Mr Sanwo-Olu when relocated from Warri.
According to Mr Moses, his mother told him a Yoruba man, known as Jide Sanwo-Olu, is his biographical father, following his repeated inquiry about the identity of his father.
Mr Moses said when he realised that the person mentioned by his mother has almost exact semblance to the Lagos governor, he tried unsuccessfully to contact Mr Sanwo-Olu. After several failed attempts, he decided to file a lawsuit. He told the court of the hardships he endured having to be raised alone by his poor mother without financial assistance from Mr Sanwo-Olu.
He wants a DNA test to prove his claim and called on the Lagos governor to waive his immunity to agree to a paternity test.
His lawyer, J.O. Aikpokpo-Martins, prayed the court to compel Mr Sanwo-Olu to “acknowledge and accord the claimant all the rights of a son.” He also urged the court to adjourn the hearing to January 17 to enable the defendant to carry out a DNA test.
Mr Aikpokpo-Martins stated that Templars Law Firm, representing the Lagos governor, had filed a motion to strike out the matter because the governor was not ready to waive his immunity.
“We are expecting that he will do that if, indeed, he is sure that he is not the father of the claimant. But unfortunately, he invoked his immunity to say he is immune against lawsuits, and he is not ready to wave it,” Mr Aikpokpo-Martins explained. “Upon that, they brought the application that the court should not hear the matter. The court should strike out the matter.”
Mr Moses’ lawyer noted that the matter could be resolved amicably if Mr Sanwo-Olu agreed to a paternity test and urged the Lagos governor to take the test.
“Nothing more to it,” said Mr Aikpokpo-Martins. “We ourselves, we are not ready. I pleaded with the other side to give us time to see if this matter can be resolved, resolved in the sense that the governor will just waive his immunity and come for a DNA test.”
He added, “If he is sure that he is not the father of the boy, why should he be afraid of submitting himself to a DNA (test)? We have a situation where the claimant wants to be aware of who he is and has stated clearly in the case that he has no family.”
The court adjourned the matter until January 17, 2023.
Top Stories