Zelensky, who has led his country in the ongoing war with Russia, refused to leave the country at the onset of the war despite offers from other country leaders. 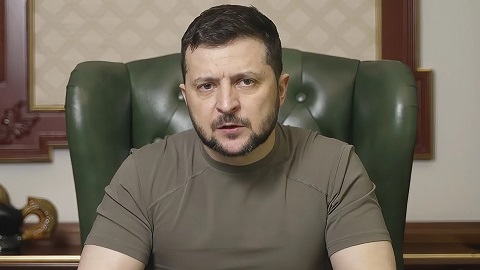 President of Ukraine, Volodymyr Zelensky is the 2022 Time’s Person of the Year.
The announcement was made on Wednesday by Time Magazine.
It hailed the wartime president for his unwavering strength and “contagious” courage in the face of “unprovoked Russian aggression.”
Zelensky, who has led his country in the ongoing war with Russia, refused to leave the country at the onset of the war despite offers from other country leaders.
Instead, Zelensky has been constantly seeking support from world leaders during the war, which has lasted for over ten months.
“TIME’s 2022 Person of the Year: Volodymyr Zelensky and the spirit of Ukraine,” the magazine cover read.
Time’s reporter, Simon Shuster, wrote: “Zelensky’s success as a wartime leader has relied on the fact that courage is contagious.
“It spread through Ukraine’s political leadership in the first days of the invasion, as everyone realised the president had stuck around.
“His professional instincts derived from a lifetime as an actor on the stage meant he knew how to read a crowd and react to its moods and expectations. Now his audience was the world. He was determined not to let them down.
“Courage came to define his fellow Ukrainians, too. Instead of running for their lives, many Ukrainians grabbed whatever weapons they could find and ran to defend their towns and cities against an invading force armed with tanks and attack helicopters.”
Zelensky, who had surprisingly emerged as Ukraine’s president in 2019, was formerly a comedian and TV personality. In Wednesday’s publication, Shuster noted that the once light-hearted man had changed a great deal following the invasion of Russia into his homeland.
“In April, less than two months into the invasion, Zelensky told me he had aged and changed ‘from all this wisdom that I never wanted,’” he wrote.
Speaking on Ukraine’s recent recapture of a major city, Kherson, from Russian occupation, the president said that in making battlefield decisions, he would focus first on human lives
“We could have pushed into Kherson earlier, with greater force, but we understood how many people would have fallen,” he said in the interview. “That’s why a different tactic was chosen, and thank God it worked. I don’t think it was some genius move on our part. It was reason winning out, wisdom winning out against speed and ambition.”
Russia continues to face international sanctions as a result of its president, Vladimir Putin’s refusal to back down from his plans to annex the neighbouring country’s territories.
Most recently, the European Union Members of Parliament passed a resolution to recognise Russia as a state sponsor of terrorism.
Top Stories