Governor Charles Soludo had imposed a levy of N30,000 for trailers loading and offloading goods in Anambra State. 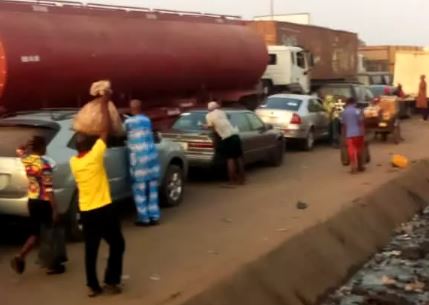 In the early hour of Friday, trailer and lorry drivers, staged a huge protest around the Niger Bridge.

They blocked the Enugu-Onitsha, Onitsha-Owerri expressway, Niger Bridge Head and all the roads that leads into and out of Anambra State through Onitsha, protesting government’s tax on trailers, lorries, truck and other vehicles bringing goods into the state.

Governor Charles Soludo had imposed a levy of N30,000 for trailers loading and offloading goods in Anambra State.

Some are also said to be paying N15,000 depending on the type of truck, down to the lowest, which are buses, paying N5,000 to N3,000 for loading and offloading of goods.

The levies have received heavy criticism and rejection by the people of the state and vehicle drivers, who described the government as callous and anti-people.

Even industrialist, businessmen, importers and warehouse operators, located in different areas of Onitsha and its environs, had protested the levies and appealed to the state government to cancel it, and withdraw the people being used to collect them.

They said the collectors were threats to their lives and security, and exposing them to kidnappers.

Speaking with Vanguard Friday morning, some residents of Onitsha, who were made to trek long distances to their markets and destination, following the blockage of the roads by the protesting trailer and lorry drivers, faulted the levies.

They wondered why a responsible government will impose such amount of levy on vehicles bringing goods, including food stuffs into the state at this time of the year and under the high inflation rate, high cost of diesel and petrol, and when people are struggling to eat, even as preparation for Christmas and New Year are at their peak.

A driver who spoke to Vanguard this morning, Odion Omoroge, said he drove all night from Abuja to Benin, where he carried bags of garri and some tubers of yam into Onitsha.

He expressed surprise about the levy, saying that he has never seen such anywhere in Nigeria, describing the Soludo-led government “as the worst the people of the state will see.”

According to Omoroge, “The problem with this government, as I observe, is that it believes that money collected from the people as levy and tax and other revenues are the only money that it will use to work for the people.

“It is not talking about money from the government, and one begins to wonder if Anambra State is not getting any allocation from Federal government.

“What Anambra people and people coming into this state will be seeing in the near future about this government will be terrible and shocking to them; its obsession for levy and revenue is alarming.

“Am afraid that one day there may be blood revolt by the people, against this government because everything it is doing is at the extreme.

“Touts are everywhere in Onitsha violently collecting money from people, even men and women on uniforms are violently stopping motorists on the roads accusing them of one false traffic offense or the other and violently collecting cars and vehicles keys and making them part with fines ranging from N10,000, N20,000 and N50,000.

“We know that these monies are not paid into government accounts.

“Violence in everything about collection of money is being witnessed daily in Anambra State, particularly in Onitsha.”