Bankman-Fried, 30, who was ordered to spend at least until February 8 in a jail in the capital Nassau was arrested at his $40million penthouse in the exclusive celebrity enclave of The Albany the night before. 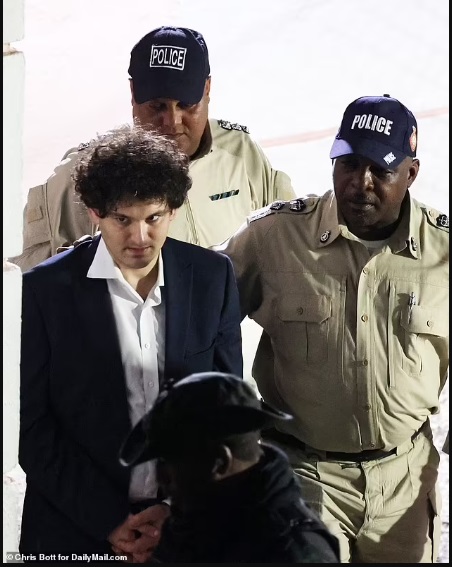 Crypto tycoon, Sam Bankman-Fried has been sent to prison in the Bahamas.
He was pictured in handcuffs as he was being led away from court in The Bahamas on Tuesday night, December 13, after being denied bail.
The FTX co-founder accused of ‘one of the biggest financial frauds in American history’ was surrounded by a group of at least six police officers as he was walked out of a side entrance following a marathon eight-hour session.
Bankman-Fried, 30,  who was ordered to spend at least until February 8 in a jail in the capital Nassau was arrested at his $40million penthouse in the exclusive celebrity enclave of The Albany the night before.
Despite being remanded in custody, Bankman-Fried could still be released on bail by the Supreme Court according to Bahamas-based attorney, Romona Farquarhson - who said it was 'very likely' he will his case heard before February 8.
Farquharson told DailyMail.com exclusively that it's unlikely that SBF will be held in the general population of the nation's only real prison, the Bahamas Department of Corrections also known as Fox Hill Prison.
After being denied bail by Chief Magistrate Joyann Ferguson-Pratt over accusations he defrauded investors of $ 1.8 billion, the financial guru emerged looking bewildered and with his hands held low in front of him and the wrists cuffed.
He refused to answer any questions or speak as he faced a barrage of cameras before being led to a blue Ford Explorer and having an officer put his hand on his head to guide him inside.
The failed tycoon, who enjoys being known as SBF, was driven off to the Bahamas Department of Corrections’ notorious Fox Hill Prison. He faces 155 years if convicted of fraud and money laundering.
SBF is due in court again on February 8 after the judge in the case decided that his finances and the seriousness of the charges against rendered him a serious flight risk. His passport was handed over to authorities on Monday.
Top Stories