Two Nigerian Nationals, American Man And One Other Stand Trial For Drug Trafficking In Cambodia


Two Nigerian nationals, one American and a Cambodian, stood trial at the Phnom Penh Municipal Court in connection with selling more than two kilogrammes of meth to undercover police officers in 2021. 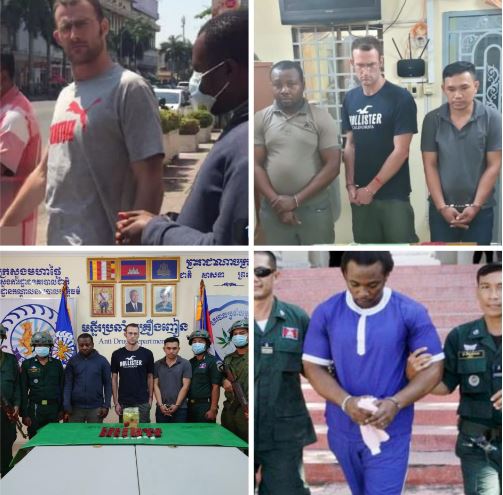 Two Nigerian nationals as well as one American and a Cambodian, are standing trial in Cambodia.

They stood trial at the Phnom Penh Municipal Court in connection with selling more than two kilogrammes of meth to undercover police officers in 2021.

Recall that Chineme Nwoko Precious was arrested and sentenced to 27 years imprisonment in 2014 for attempting to smuggle heroin to Australia using two women drug 'mules' in 2013.

Judge Sokunthea said that they all were charged with “drug possession, transport and trafficking” under Article 40 of Cambodian Law on Drugs Control.

If convicted, they each face a jail term of 20 years or a life sentence.

Judge Sokunthea said Thean Tola was arrested by the anti-drug department police at the Ministry of Interior while trying to sell the drug to an undercover police officer who posed as a drug dealer near Chroy Changvar bridge on the National Road 6 on February 5 last year.

“Police seized more than one kilogramme of meth and another 360 grammes of metapazam from him. After Tola’s confession, police prepared a sting operation and arrested the other suspects involved,” she added.

Sample was arrested on the same day at about 7:30 pm from Tuol Kork district’s Phsar Depo commune, and police seized 17 small packages of ice weighing 14.7gms from him.

The arrest of Vincent was made on February 6 in Dangkor commune and the police seized almost one kilogramme of meth from him.

Based on his confession, police went to Prey Sar prison on February 8 to mark the arrest of Chineme, who was languishing in the prison for 27 years in a separate drug trafficking case.

At the hearing, Tola, Sample and Vincent admitted to the offence and said they tried to sell the drug for money and denied to be owners of the drug.

While confessing to drug possession and use they said that they consumed the meth for fun because they were sitting idle and had no work during the Covid-19 outbreak in 2021.

They asked the court to show leniency and give a reduced penalty.

During the hearing, Tola told the court that the drug police found from him belonged to Sample from who he bought it for $100.

Sample denied the accusation and said that he got the drugs from an unidentified Nigerian man who told him to give it to Tola. He added that the Nigerian also promised to pay him $200 for the exchange.

"The 17 small meth packets seized from me was for my personal use only, not for sale,” Sample told the court.

Meanwhile, Vincent said that the drug seized from him belonged to the Cambodian who had been at large.

Vincent said he received a phone call from his friend Chineme from his prison cell asking him to collect a “hamburger” packet from a Cambodian man near Stung Meanchey market and to give it to a foreign man named David in Dangkor commune.

He added that after receiving the ‘hamburger box from the Cambodian man, he drove his own motorbike to meet the person.

When he contacted him on the phone number given by Chineme, the man asked to meet him at a house in Borey Piphop Thmey in Dangkor commune.

“The man I met was Matthew David Sample,” he added.

He added that it was police who showed him the drug hidden inside the packet which he thought to be a hamburger.

"As I was not authorised to use the phone in the prison, how can I contact these people staying outside the prison?” he asked the court.

"I do not know anything about this case and did not commit anything as accused,” he added.