The honorary award recognizes the recipient's 'outstanding contributions to the world of entertainment', according to the Hollywood Foreign Press Association. 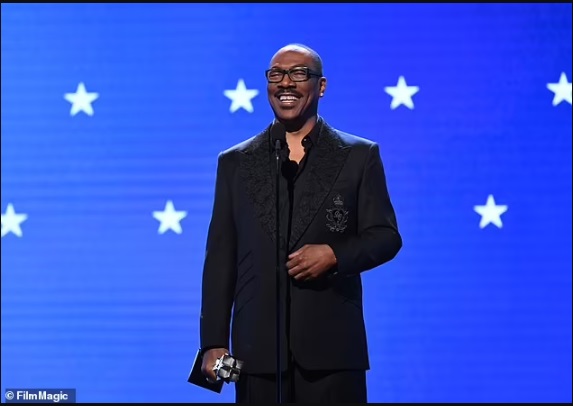 Hollywood icon Eddie Murphy will be honoured with the prestigious Cecil B. DeMille Award at the upcoming 80th Golden Globes.
This was confirmed by The Hollywood Foreign Press Association (HFPA).
The honorary award recognizes the recipient's 'outstanding contributions to the world of entertainment, according to the Hollywood Foreign Press Association.
'We're honored to present this year's Cecil B. DeMille Award to the iconic and highly esteemed Mr. Eddie Murphy,' HFPA president Helen Hoehne said in a statement.
'We're thrilled to be celebrating the lasting impact on film and television that his career — in front of and behind the camera — has had through the decades.'
Previous recipients of the trophy include Steven Spielberg, Oprah Winfrey, George Clooney, Denzel Washington, Tom Hanks, and an array of other A-listers.
The recipient of the award is decided by the HFPA's board of directors and is one of the show's highest honors.
Eddie, 61, won a Golden Globe in 2007 for Dreamgirls and has been nominated for five other Golden Globes over the years.
His iconic body of work includes roles in The Nutty Professor, the Shrek films, Dr. Dolittle, Coming to America and Beverly Hills Cop.
His prolific career in comedy and acting earned him the Lifetime Achievement Award at the Critics' Choice Awards in 2020 and the Hall of Fame Award at the 2021 NAACP Image Awards.
In 2015, he received the Mark Twain Prize for American Humor at the Kennedy Center.
Top Stories