The military men stormed the area around 5 pm and reportedly unleashed mayhem on residents. 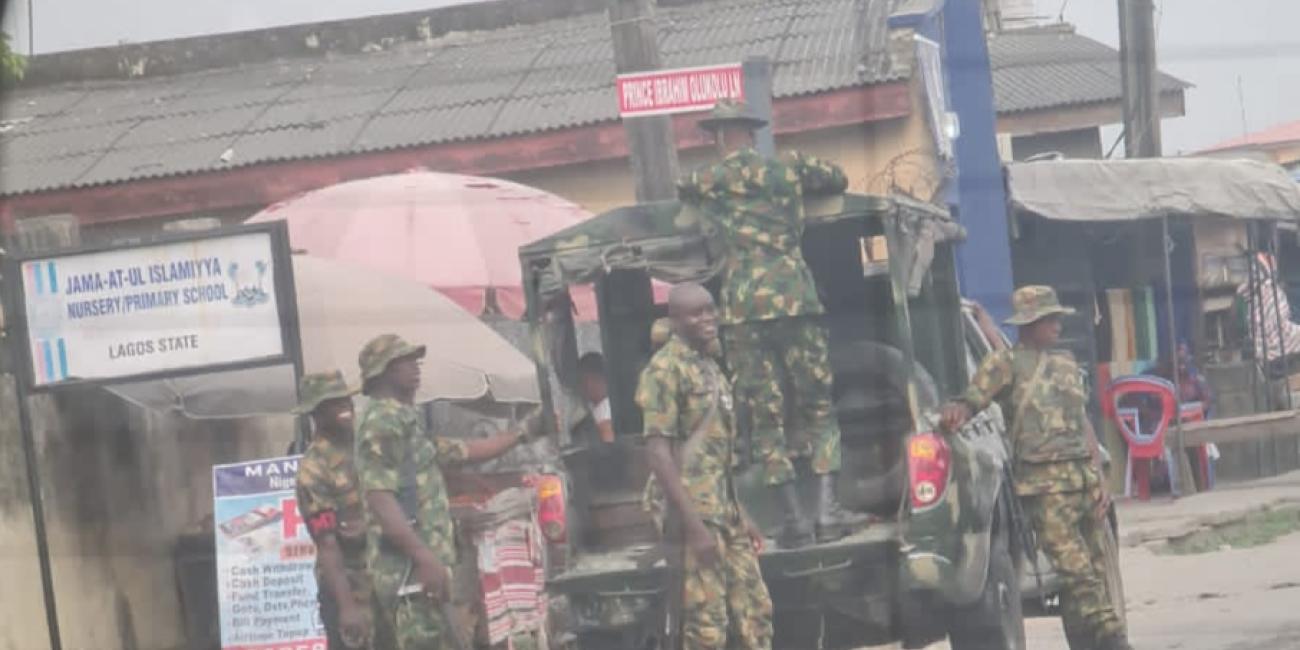 According to a report by SaharaReporters, some Nigerian soldiers have caused a stir in a Lagos community.

The soldiers, on Saturday stormed Igbo-Efon in the Eti-Osa local government area of Lagos in unmarked vehicles over a chieftaincy tussle.

The military men stormed the area around 5 pm and reportedly unleashed mayhem on residents.

According to residents, the soldiers were deployed to do the bidding of Abogun family, involved in a legal tussle over the chieftaincy title in the community. The heavily-armed soldiers were stationed around the residence of the traditional ruler of the community (Baale), school area and the road leading to Igbo Efon.

An eyewitness who spoke to SaharaReporters on the phone said several army vehicles loaded with soldiers had taken over Igbo-Efon.

“Initially, I thought there was a coup in Nigeria because it beggars belief that the army would deploy such troops to a village if there is no coup or insurrection,” the eyewitness said.

The Abogun family who recently lost out in the chieftaincy (Baale) tussle in the area was behind the illegal army occupation of the sleepy community, Newsnowonline investigation revealed.

Last Sunday, one Rilwan Abogun was also in the area with mobile policemen on a similar illegal duty aimed at making the community ungovernable for its new Baale, Chief Tajudeen Olukolu.

The Divisional Police Officer at Ilasan, Area Commander at Elemoro and Rapid Response Squad commander who were contacted regarding the unrest, responded and arrested some hoodlums, including a member of the Abogun family who was party to a peace treaty before allegedly making a U-turn and unleashing mayhem on the villagers.

“They were later arraigned at a magistrate court before the army occupation of the area on Saturday,” the source said.

Last Monday, Chief Olukolu said the job of security agencies is to maintain peace and order, adding that the DPO, Area Commander and RRS Commander were handling the matter.

But it seems to have degenerated with the latest invasion of the community by soldiers.

The army was in the community for a similar operation in 2021 while the chieftaincy matter was still at the tribunal. In the ensuing melee, some women were allegedly raped. The Abogun family said to be at the centre of the crisis eventually lost at the tribunal.

In November 2020, a Lagos State High Court recused itself from a suit seeking to determine the founders and those that have a legitimate right to the stool of the community located at Lekki-Epe axis of Lagos State. The court presided over by Justice G. A. Safari of the Lagos Judicial division noted this on November 5, 2020, whilst delivering judgement in a fundamental human rights enforcement suit filed by some members of the community, according to a report by TheNigerialawyer.

However, despite recusing itself from the suit in part, the court restrained the state police commissioner from arresting or detaining anyone celebrating the Abogun/Yemoja Day in Igbo-Efon, except in accordance with the law.

The contention about the founder of the community, as well as the legitimate owners of the title had formed part of the suit before the court. The judge noted that on page 15 of its judgement) the suit before it was brought as a means of enforcing the fundamental human rights of the Applicants.

However, according to the judgment obtained by TNL, Justice Safari said since the issue of monarchy and founder are highly contentious, he would not make any categorical statement on it, thereby declining to hear those issues.

“With respect to the issue of who founded Igbo-Efon Community and who attacked who between the Applicants and the 3rd to 12th Respondents. I am of the view that these two issues cannot be resolved by affidavit evidence, as both parties have presented conflicting affidavit evidence in support of their various positions,” he said.

He added that “the issue of determination of who founded Igbo-Efon and the Obaship stool of Igbo-Efon is not within the purview of a fundamental rights unity, I will therefore refrain from making any categorical finding on same.”

The Applicants had dragged the Respondents to court vide an (amended) Originating Motion dated the 31st day of January 2020 and brought pursuant to Sections 6 (6), 33, 34 (1), 35, 40, 42, 46 (1) of the 1999 Constitution of Nigeria, Articles 4, 5, 6, 12 & 14 of the African Charter on Human, and People’s Rights (Ratification and Enforcement) Act 2004; praying the court for the enforcement of its right, as it relates to their right to celebrate the festival of their descendant Kumoro Abogun tagged Abogun/Yemoja days, without any form of molestations or arrest by the Defendants.