It is alleged that the officer, who was stationed at Hillcrest police station, was dating both women at the time of the murders. 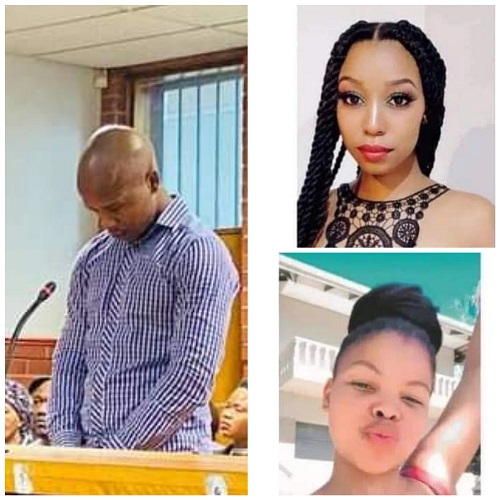 A police officer in South Africa accused of killing his two girlfriends has committed suicide.
Const Mlungisi Blessing Sikhakane was found dead in his cell at Westville prison.
Correctional services spokesperson Singabakho Nxumalo, who confirmed on Monday, December 19, 2022, said that Const Mlungisi Blessing Sikhakane had taken his life.
“He committed suicide by hanging,” Nxumalo told TimesLIVE.
Police had been notified, and an inquest into the death in custody had been launched.
We had reported that Sikhakhane allegedly murdered Sthembile Ngobese, 23, and Enhle Majozi, 18, both from KwaNyuswa near Hillcrest, in October.
It is alleged that the officer, who was stationed at Hillcrest police station, was dating both women at the time of the murders.
Sikhakhane, 27, who faced two murder charges abandoned his bail application last month and requested a magistrate from outside the Pinetown district to handle his case.
However in a U-turn last week Sikhakhane’s attorney told the court he intended to reapply for bail.
Prosecutor Nomcebo Xulu told the court last week they received the postmortem results and are waiting for ballistic results and video footage. Regarding the requested date, Xulu said the investigating officer was going on leave until January 15.
The case was adjourned to January 19 for a formal bail application. Xulu said the state would oppose bail.
Action SA leader in KwaZulu-Natal, Zwakele Mncwango, who attended the case, said: “The families were hoping to get closure by hearing from him of what really happened and why he killed them. Unfortunately, the families will never get answers because Mlungisi decided to commit suicide yesterday inside Westville prison.
“We hope correctional services will investigate he was able to hang himself inside the prison cell."
A petition which was started by Majozi’s relative Precious Ndwalane on Change.org, has gained over 8,000 signatures in opposition to Sikhakane’s bail application, before he decided to kill himself.
"Enhle and another girl, Sithembile Ngobese (24), were both in a relationship with the police officer who is believed to have shot and killed both of them at his house. Enhle and Sithembile were shot in the head and other parts of their bodies and were declared dead by paramedics," the petition read.
"11 empty cartridges were found at the scene of the crime. The accused police officer is being held in custody and his bail hearing was postponed to November 7 2022 at the Pinetown Magistrate Court,” the petition stated.
"The accused police officer, Mlungisi Blessing Sikhakhane, took away my brother’s firstborn daughter and Nomsa’s only child. He also took the life of Sithembile.
"Two families have suffered an unimaginable loss at the hands of a man who swore to serve and protect.
"Enhle and Sithembile died a senseless and cruel death. The very thought of him walking the streets and potentially going back to his job is scary and terrifying. Our families are at risk and we don’t even want to imagine him doing this to yet another innocent family.
"Society has no place for a man like Mlungisi. The police force has no place for an officer like Mlungisi. Enhle and Sithembile deserve justice. They had their whole lives and he recklessly took away their future and left us in deep hurt and unbearable suffering."
Top Stories