Ronaldo has now been included as part of the worst team of the World Cup, according to statistics provider Sofascore. 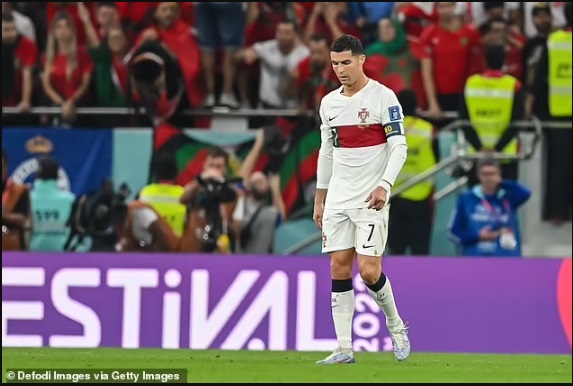 Safoscore has named Cristiano Ronaldo in the worst XI from the just concluded World Cup.
This comes after Ronaldo endured a difficult time with Portugal at the tournament in Qatar.
Ronaldo scored only one goal for his country and was dropped to the bench by Fernando Santos for their last-16 clash with Switzerland and their shock quarter-final defeat to Morocco.
The 37-year-old free agent reportedly threatened to quit the Portuguese camp during a heated meeting with Santos after he found out he had been axed for the Switzerland game, but the claim was quickly denied by the country's FA and the player.
Ronaldo has now been included as part of the worst team of the World Cup, according to statistics provider Sofascore.
The worst XI team is based on Sofascore's rating, which gives each player a score out of 10 for their performances at the tournament. To be included, players had to have made a minimum of four appearances in Qatar.
Ronaldo was named in the Sofascore side after scoring just 6.46. The Portuguese forward is partnered up front by Lautaro Martinez, despite the Argentinian being a member of the team which lifted the trophy after beating France on penalties in the final. 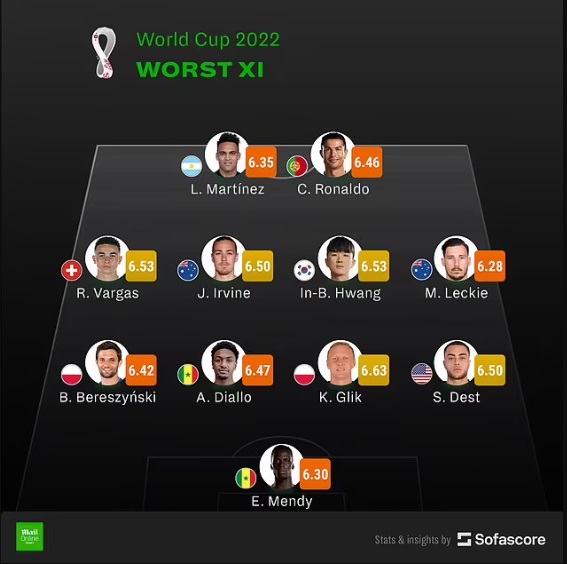 Martinez, who failed to score for Argentina in Qatar in 148 minutes of action across the entire tournament, was given a rating of just 6.35.
Chelsea and Senegal goalkeeper Edouard Mendy was also been selected by Sofascore in their worst XI with a rating of just 6.30. US star, Sergino Dest, who is contracted to Barcelona but is on loan at AC Milan, got a paltry rating of 6.50.
Kamil Glik and Bartosz Bereszy?ski of Poland, and Senegal centre back Abdou Diallo complete the back four.
Jackson Irvine and Mathew Leckie of Australia were picked in the midfield alongside South Korea's Hwang In-beom and Switzerland's Ruben Vargas.
Top Stories