We've Cried Out All The tears And Shouted All The Prayers - Ukraine President, Zelensky's Emotional Year Speech (Video)


Zelensky promised the return of lands Moscow proclaimed it had annexed in September. 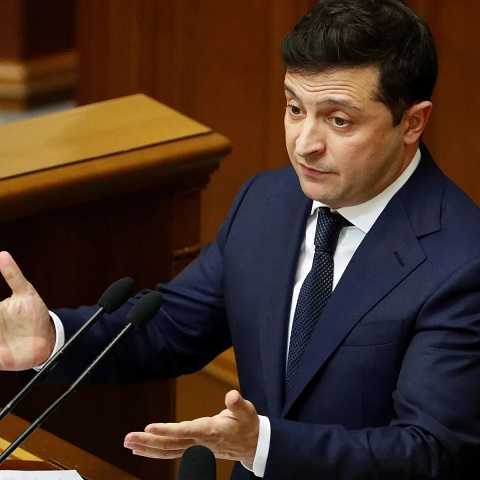 President of Ukraine, Volodymyr Zelensky has vowed to make sure all territories belonging to his country that was taken over by Russia are returned.
This is contained in an emotional new year speech laced with footage of Russia's attacks on the country and words of pride for Ukrainians withstanding attacks, darkness and cold just released.
Zelenskiy, recalling some of the most dramatic moments and victories of the war, said in his emotional 17-minute video message that Ukraine will never surrender and will keep fighting e be as the war enters it's 312th day.
"We were told: you have no other option but to surrender. We say: we have no other option than to win," said Zelenskiy, dressed in his trademark khaki outfit and standing in darkness with the Ukrainian flag fluttering behind.
"We fight as one team – the whole country, all our regions. I admire you all."
A few minutes after Zelenskiy's speech - released just before midnight Kyiv time on New Year's Eve - numerous blasts were heard in the capital and around the country. The attacks followed a barrage of more than 20 cruise missiles fired across Ukraine on Saturday - and many bombardments earlier.
As the war drags into its 11th month, Moscow was unprepared for the staunch resistance and billions of dollars in Western weapons that have turned the tide in Ukraine's favour.
Russian troops have been forced out of more than half the territory they took in the first weeks of what Putin calls a "special military operation" to "denazify" and demilitarise Ukraine.
Zelenskiy promised the return of lands Moscow proclaimed it had annexed in September.
"It's impossible to forget. And it's impossible to forgive. But it's possible to win," he said.
While listing Ukraine's successes, Zelenskiy referred to the Crimean Bridge, Moscow's symbol of the annexation of the peninsula that linked it with Russia and that was torn by an explosion in October.
"This year has struck our hearts. We've cried out all the tears. We've shouted all the prayers," Zelenskiy said.
"We fight and will continue to fight. For the sake of the key word: 'victory'."
Watch the video below:

Zelensky with an inspiring New Year’s Eve speech for the Ukrainian nation.

He speaks at length about how the world and the Ukrainian nation changed for ever on February 24th.

Let’s make sure that the Ukrainians will have all the weapons they need in 2023 pic.twitter.com/Lci3LxTsDG