Take a look at some of the Nigerian musicians who had to endure the huge embarrassment of tumbling and falling down right in front of their fans. 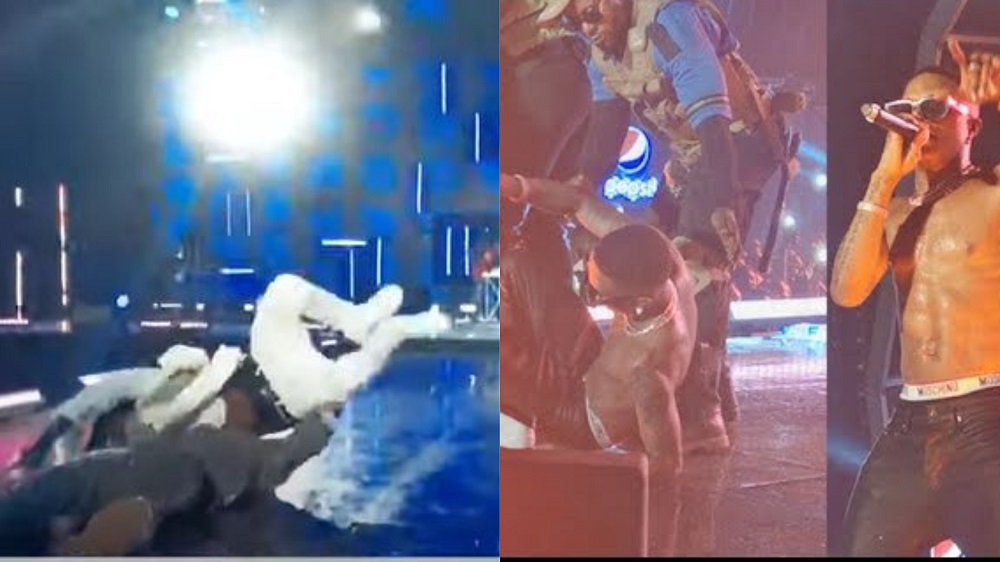 Without a doubt, Nigerian musicians are generally known to be very energetic while performing on stage. They know how to get the crowd screaming with excitement as they work to give their fans their money's worth during concerts and other shows.

Jumping, gyrating, dancing, Nigerian artists surely know how to give their all to their audiences. However, the excitement experienced during these energetic performances can get too overwhelming sometimes, causing some of these artists to tumble and fall off the stage.

But, it is noteworthy that sometimes, it's not even the adrenaline that causes the fall. Sometimes it is faulty stage arrangements and sometimes it can be the carelessness of the artist. Whatever the case, a number of Nigerian artists are on record to have fallen on stage when performing.

In this article, we will show you some of these musicians who had to endure the huge embarrassment of tumbling and falling down right in front of their fans.

Burna Boy is considered to be one of the most successful Nigerian artists of all time. The Grammy-award-winning musician is known all over the world for his absolutely wonderful rendition of gripping tunes that he releases every year. He is one of the most awarded Nigerian artists of all time and is also renowned for his commanding stage presence.

Widely considered to be one of the best live performers from Nigeria, Burna Boy always knows his way around stage performances. But even he, did not escape the humiliation of falling down on stage. As a matter of fact, he has fallen on stage more than once.

The first time Burna Boy fell on stage was in 2012 at the 2012 Headies Awards. Burna Boy was just starting his career at the time and had been selected as one of the two rookie acts to grace the stage and perform. It was while on stage that he fell. Burna Boy had just finished telling the guests how excited he was to be on stage when he teased them with one of his new songs. However, because he was obviously not looking at the spaced skirting at the edge of the stage, Burna tumbled off the stage and fell hard. However, within seconds he was back up like nothing happened and then began performing.

The 2012 Headies award show was not the only time Burna Boy has fallen on stage. In 2022, the Grammy winner fell again on stage, this time at his London Concert. The African Giant, as he is fondly called, was thrilling an audience made up of his enthusiastic fans when he started jumping and soon stumbled, falling to the ground.

Wizkid is widely regarded to be one of the greatest Nigerians to ever hold the microphone. Also a Grammy award winner, Wizkid happens to be the most awarded Nigerian singer ever. He is no doubt, also one of the most loved artists in the music industry and this is evident in the way fans outdo themselves to prove their love for the music star.

Wizkid is also a master of stage performances. But he too suffered an embarrassing fall during one of his performances. The incident happened at his 2021 Starboy Fest in Lagos. In Wizkid's case, it was not a tumble, instead, he fell because fans were trying to cling to him at all costs.

Like other shows where Wizkid has performed, the event was not free of drama, as over-excited fans struggled to get to him. During the performance, an excited fan held one of his legs and refused to let go. This caused a mild drama as fans started screaming and bodyguards struggled to release Wizkid’s leg to avoid a fall on stage.

However, it was unsuccessful for some minutes as Wizkid fell on stage while the fan held onto his leg.

Davido's live performances are never dull as he is constantly keeping fans up with his energetic moves. However, even Davido was one of those who suffered the embarrassment of falling on stage. Davido fell on stage in Rwanda where he was billed to perform. The incident happened in 2018 and caused quite a lot of buzz around social media.

At the event, the singer was climbing the stage at the Amahoro Stadium, Kigali Rwanda to perform, when he fell. However, he quickly got back up and continued the show.

Mr P is one of the most gifted Nigerian musicians ever, Blessed with incredible dancing skills, he is regarded as one of the greatest Nigerian dancers. And he uses his dancing skills to thrill audiences everywhere he goes to perform. He is also a great vocalist who is renowned for his high-pitched renditions.

He first gained fame as one-half of the popular pop group, P Square. Mr P and his twin brother, Rude Boy, formed P Square in the early 2000s, and then went on to become the greatest pop group ever to emerge from the African continent.

However, Mr P has also established himself as a solo act as well. In 2014 when P Square was performing at a concert in Lagos, Mr P suffered an embarrassing fall. Psquare was belting their hit song ‘Bring it on, a song off their album ‘Double Trouble’ when Mr P stepped too close to the center edge of the five-foot elevated stage and fell off.

He tumbled and landed on the floor, hitting his back against the protective metal barricades used to shield fans from the stage. However, he soon got back to the stage like nothing happened and continued performing.

Lil Kesh is a Nigerian singer and rapper who rose to the limelight, after releasing the hit single "Shoki" in 2014. He has since dropped several other hit singles and is also hailed for his gripping stage performances. Unfortunately, Lil Kesh is also one of the Nigerian stars to have fallen on stage. The incident happened in 2019 at the Olamide Live In Concert.

Lil Kesh thrilled fans at the event. While he was performing one of his smash hits, his producer, Young Jonn excitedly joined him on stage. But as Young Jonn was rushing to the stage in euphoria, he didn’t realize that there was some water on stage. He slipped and ran into Lil Kesh who also fell.

They both got up and hugged each other only to fall down again. Attendees at the event blamed the risky occurrence on fans who spilled water onto the stage.

Arya Starr is a Nigerian superstar who is hailed as one who has one of the best voices in the industry. Since breaking into fame in 2021, Arya Starr has since dropped hit songs that have made her a household name not only in Nigeria but around Africa and beyond. Interestingly, the young, rising superstar has also tasted what it feels like to fall on stage.

In 2022, Arya Starr was performing at the Afrochella Festival in Ghana when she stumbled and fell. Ayra Starr, who wore a yellow attire, was running during her performance when she slipped and fell. While speaking on the incident later, the singer said the fall was painful.

Small Doctor is a Nigerian Fuji, afro-pop recording artist and performer. After kickstarting his career in 2012, he went on to grab national attention with several hit singles and albums, winning several awards in the process. Over the years, he has since endeared himself to people's hearts.

In 2016, Small Doctor joined the list of Nigerians who have fallen on stage. He was performing his hit song, ‘Mosquito killer’, on October 2 that year at DJ Jimmy Jatt‘s concert in Lagos when the incident happened. The rapper got too carried away with his energetic performance that he went too close to the edge of the stage and fell off. However, he was quick to rise and continue his performance while his fans danced on.

Seyi Shay is an accomplished Nigerian singer who is known to have an incredibly scintillating voice. She has been very active as a singer for several years, and during this time, has won over so many fans. She has several hit singles to her name and has won awards that tell of her accomplishments.

Seyi Shay, who is known for her energetic stage performances, has also suffered an embarrassing fall on stage. The incident happened in 2017 at the All Africa Music Awards. Seyi Shay was performing her hit single Yolo Yolo at the event when she took a tumble and fell.

At one point in her performance, the singer went to make a turn and ended up landing on the ground. However, she quickly got up though and continued on with the performance.

Bella Shmurda is a Nigerian singer who rose to fame in 2018 with the release of his song "Vision 2020". He has since gone on to release several other hit songs, becoming one of the most popular music stars in the country. The singer joined the list of Nigerian singers who fell on stage in 2022.

Ruby Gyang is a talented Nigerian singer and songwriter who is signed to the famous Chocolate City label. She has put out a number of singles and has garnered accolades for her velvety smooth voice. Unfortunately, the singer is one of the Nigerian artists to have fallen on stage.

In 2014, the Chocolate City singer was performing at the One Mic Naija concert in Lagos when she took a tumble and fell. However, after she was helped back up immediately, she brushed off the embarrassing incident and continued the show.