In a letter sent out to students, Miller apologized for the incident and said not offending the school's Muslim students is incredibly important. 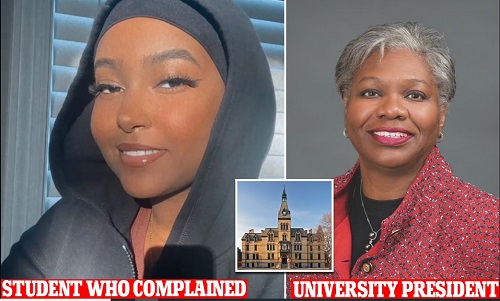 An American professor has left her job after showing students a painting of the Prophet Muhammad in her class.
The incident happened in Minnesota, US.
Erika López Prater, 42, was let go from her position at Hamline University in Saint Paul despite warning students ahead of time about the 14th-century imagery.
A new report from the New York Times indicates the professor was fired by Hamline University President Fayneese Miller for putting academic freedom over the respect of Muslim students.
In a letter sent out to students, Miller apologized for the incident and said not offending the school's Muslim students is incredibly important.
'It is not our intent to place blame; rather, it is our intent to note that in the classroom incident—where an image forbidden for Muslims to look upon was projected on a screen and left for many minutes—respect for the observant Muslim students in that classroom should have superseded academic freedom,' Miller said.
The report from New York Times stated the syllabus issued by the lecturer notified students they would see holy figures across religions, including the Prophet Muhammad and the Buddha.
Additionally, López Prater allegedly gave students a heads-up moments before the painting was shown, giving them another chance to leave the room if they didn't feel comfortable looking at the picture.
Despite the warnings, senior Aram Wedatalla, a Muslim in the class, said she was blindsided by the image.
'I'm like, "This can't be real,"' said Wedatalla in an interview with the school's newspaper.
'As a Muslim and a Black person, I don't feel like I belong, and I don't think I'll ever belong in a community where they don't value me as a member, and they don't show the same respect that I show them,' the student said.
Wedatalla, a member of the Muslim Student Association, then gained support from Muslim students who were not in the class but called the incident an attack on their religion.
After the class ended, Wedatalla spoke with López Prater.  The conversation prompted the professor to send an email to her department head, Allison Baker, to give her a heads-up about the situation.
Baker, the chair of the digital and studio art department, responded by saying: 'It sounded like you did everything right.'
'I believe in academic freedom so you have my support,' Baker wrote.
The group demanded officials take action and the movement led to López Prater, a first-time adjunct, not being welcomed back for the spring semester.
Deangela Huddleston, a Hamline senior and Muslim Student Association member, said of the incident: 'Hamline teaches us it doesn’t matter the intent, the impact is what matters.'
Top Stories