The Lagos Senator made the call at the South-East women rally for Tinubu/Shettima Presidential Campaign in Owerri, Imo State capital on Tuesday. 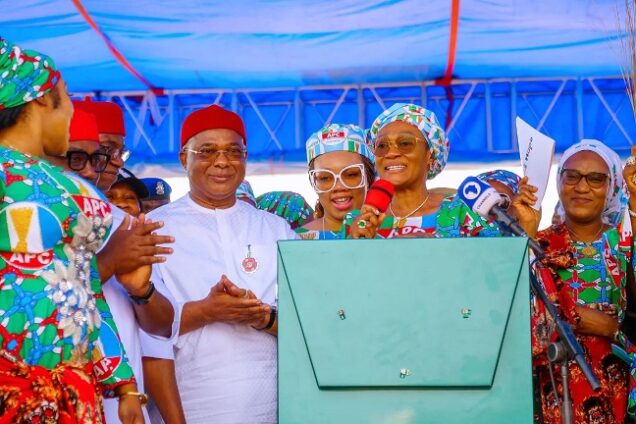 Oluremi Tinubu has asked Nigerians to vote out her husband, Bola Tinubu if he fails to deliver on his campaign promises.
The wife of All Progressives Congress (APC) Presidential candidate made the call at the South-East women rally for Tinubu/Shettima Presidential Campaign in Owerri, Imo State capital on Tuesday.
Mrs Tinubu said Nigeria’s election should not be about faith but about voting a candidate who has the fear of God.
She said: “Let’s leave religion aside; I am a Christian. Have you ever thought that one day a Christian-Christian candidate would emerge? What would be the reference point? We have tried the Muslim-Christian ticket, let us try this one too and after four years if they don’t do well, you can drive them out.
“When you have a person who fears God, not a person who is a Christian or Catholic or Muslim, but a God fearing person. When a man who fears God is in power, he will treat you right.”
Tinubu, who noted that she had served Nigeria as a governor’s wife and senator, assured the women that they would form a major percentage of the Tinubu/shettima administration.
She added: “This is work time for Nigeria. We are not playing games. Women, we will remember you and I can assure that Asiwaju for sure will remember you.
“The Tinubu/Shettima have a big package for our youth. We will sit down and work with every region on their needs,” she further assured the women.
“The election was about a renewed hope of a country that is safe, progressive and possible, with investment in entrepreneurship and human capital.”
In his remarks, Gov. Hope Uzodimma urged the South East women to take a wise decision by voting the APC presidential candidate.
Uzodimma said: “I have decided to embark on political evangelism. I will continue to preach. I will continue to speak to my people to shine yours eyes because this is the time for us to take vital decision.
“We have decided that you are better off being in a united Nigeria. A united Nigeria will best accommodate the population of Ndigbo.
“The geographical strength in the South East is not enough to accommodate us.”
He said the majority of successful men and women from the South East have their businesses in Lagos and Abuja, who would not want to experience abandoned property like after the civil war.
The governor said the party in the zone was running a unified campaign for all the candidates of the party.
“I am talking of positive change in the South East. We must no longer talk about ourselves for the sake of our children, brothers and sisters. It is clear we have decided to be part and parcel of Nigeria,” he added.
Top Stories