Christian Woman Beheaded in Kano by Angry Mob Over Blasphemy


A Christian woman trading in plastics at Kofar Wambai Market in Kano was yesterday beheaded by irate youths for allegedly blaspheming Prophet Mohammed. 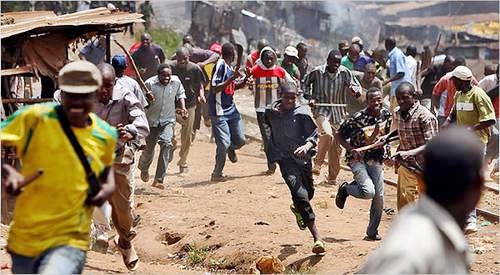 Illustrative photo of angry mob on attack
The Public Relations Officer of the Kano State Police Command, DSP Musa Magaji, has confirmed that some angry Muslim youths in Kano on Thursday evening decapitated a woman trader over allegations that she blasphemed Prophet Muhammad.
It was gathered that the victim who was said to be of Igbo extraction was accused of blasphemy during a religious argument at Wambai market.
The woman who sells plastics at the local market was in the company of her husband when she was murdered.
"At about 4:30 pm, there was a disagreement between the murdered woman and some traders bordering on religion. The woman was said to have blasphemed Prophet Mohammed, which did not go down well with the traders.
"At that point, some irate mob descended on the woman and lynched her," the Police spokesperson said, adding that the woman was in the company of her husband when the incident happened.
Eyewitnesses claimed that the deceased was in the market to buy some items from her customer popularly known as Ustaz, who engaged her in a religious joke which the woman’s response was said to be blasphemous.
They said efforts to save the woman by trader who listened to the conversation failed as the mob overpowered them and beheaded the deceased.
The witnesses said that policemen were immediately deployed in the market who shot teargas and forced shop owners to lock up and rushed home.
This came at a time the state government is challenging the decision of an appeal court which freed five persons sentenced to death last year by a Sharia Court in Kano over same issue.
Top Stories