An investigative report submitted to the Police Commmission has indicted the Assistant Inspector General of Police over his poor handling on the matter when it was brought to his knowledge. 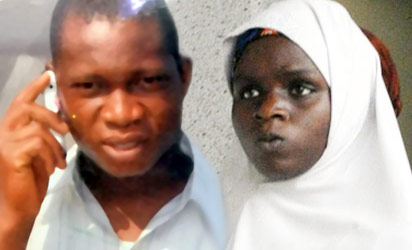 Yunusa Dahiru and Ese Oruru
Police report on the investigation into the kidnap of Ese Oruru has recommended sanctions for the Assistant Inspector-General of Police in charge of Zone 1, Shuaibu Gambo and other officers.
.
Gambo's indictment in the report submitted to the Police Commission was informed by the shoddy investigation into the abduction of the teenager and her forceful conversion to Islam.

Ese was abducted in 2015 and taken to Kano by Yunusa Dahiru who converted her to Islam and also impregnated her. Yunusa is facing criminal prosecution in Yenagoa, Bayelsa State, while the teenager had since given birth to a baby girl.

It was learnt that the AIG had faced the Force Disciplinary Committee for not taking the necessary steps to rescue the abducted teenager when the case was reported to his office.

Checks indicated that the FDC, which comprises all the Deputy Inspectors-General of Police and the Force Secretary, had sent its report to the Inspector-General of Police who forwarded the file to the Police Service Commission for further action.

Gambo allegedly did not give the case deserving attention as the case was allowed to drag on for about six months until SUNDAY PUNCH championed the rescue of the teenager in March, 2016.

Sources told Punch on Satuday in Abuja that the disciplinary committee indicted Gambo and some officers and recommended them to the PSC for appropriate disciplinary action.

A source said, “AIG Gambo has been referred to the Police Service Commission for appropriate disciplinary action over the poor handling of Ese’s case. He and some officers had faced a disciplinary committee as directed by the immediate past IG, Solomon Arase.’’

However, the Commissioner in charge of media, PSC, Comfort Obi, said Gambo’s case had yet to come before the commission’s disciplinary committee, explaining that disciplinary cases involving senior officers passed through several stages and processes before they are decided.

She said, “The PSC has departments and committees handling different things. The department will work on the file and send to the disciplinary committee. If it (Gambo’s case) has come to the Police Service Commission, perhaps, it is going through the processes.’’
Top Stories