The PDP through its spokesman has stated that the funds recently shared by the Buhari administration to states owing workers' salaries was left behind by former President Goodluck Jonathan. 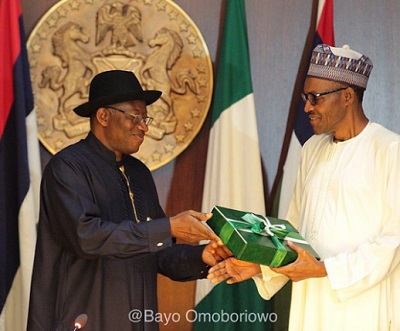 The Peoples Democratic Party (PDP) has claimed that the money recently approved by President Buhari to bailout states was part of savings set aside by former President, Goodluck Jonathan.
The PDP continued by saying that the funds would have been shared earlier but that Jonathan had insisted that it be left behind for Buhari’s administration.
This was contained in a statement released by the party’s National Publicity Secretary, Olisa Metuh on Wednesday, July 8, 2015.
It reads:
“It is gratifying to note that gradually the evidence of monies left behind by the PDP-led administration is coming to public light despite effort by the new government to hide the facts.”
“The public had been made aware that $2 billion was left in the ECA for which the Accountant –General and the APC confirmed approvals for the withdrawal of $1.7 billion.”
“We know that surely, though slowly, a lot of other monies saved by the PDP and which are now under the control of the APC government will eventually be unveiled by this administration themselves and without any effort on our part whatsoever.”
“President Buhari as a leader on whose shoulders lies the mandate of the Nigerian people and the burden of governance for the next four years should strive to disentangle himself from the intrigues, propaganda, blackmail and machinations of some leaders in his party and focus on delivering on his campaign promises for which he was elected.”
“Finally, we want the public to note that all our statements and engagements have been based on facts and issues. Consequently, we urge the Presidency to focus on issues and stop trending on personal insults, threats and abuses.”
Buhari had, on July 6, approved a N713.7bn package to help states pay workers’ salaries.
Top Stories