A yet another senior Nigerian soldier was on Tuesday, killed by the Boko Haram, army sources has told a news correspondent. 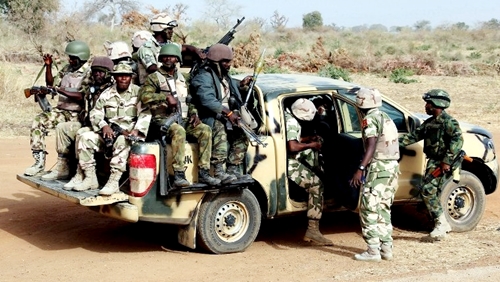 File photo
A lieutenant colonel and commanding officer of 114 TF battalion of the Nigerian Army, B.U. Umar, has been killed on Tuesday by the deadly Boko Haram terrorist sect.
According to Premium Times, army sources disclosed that the senior Nigerian soldier was ambushed alongside his troops on Monday morning between Bita and Piridang.
“His vehicle stepped on an improvised explosive device, but he was not hurt. He came out to assess the damage on the vehicle and Boko Haram opened fire and killed him in the process,” a source told PT.
It was gathered that the soldiers were said to be on their way to Yola in Adamawa State from Bita in Borno State when the incident occurred, as the full casualty from the attack is not yet clear.
Umar, who recently took over the command of the 114 battalion about three weeks ago, was a member of the 48 Regular Course in the Nigeria Defence Academy, NDA.
Meanwhile, the Army spokesperson, Sani Usman, when contacted, said he was unaware of Umar’s death, saying that he would seek further confirmation from appropriate authorities.
Top Stories