A woman who was said to be 'possessed' has reportedly caused a pilot to turn around after declaring a mid-air emergency. 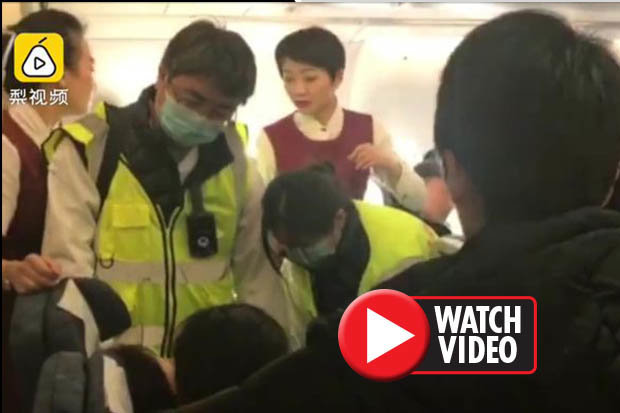 The woman lost consciousness shortly after take-off leaving staff concerned
A video has shown the dramatic moment a woman sparked pandemonium mid-air when she fainted shortly after take-off, forcing the pilot to perform a dramatic U-turn.
According to a report by Daily Star UK, the female traveller, in her 50s, lost consciousness on board an Air China flight from Beijing to Chengdu earlier today.
She caused chaos and declaring she was “possessed”, forcing cabin crew to make the call to turn the plane around.
Passengers reportedly noticed the woman had passed out just 20 minutes after take-off, immediately alerting staff.
"Her pulse was also very weak, so they gave her an oxygen mask. Then she woke up shortly,” one witness told local news media.
After she came back around, the woman is said to have become confused and aggressive towards flight attendants, shouting: “No! Don't touch me! Don't pull me!”
Video of the melee made its way onto the internet, showing a group of around six people attempting to calm her down during the dramatic incident.
The captain made the decision to turn the plane around, infuriating the woman.
She shouted: "I have to be in Chengdu. There are things possessing my body and you cannot find it by health checks."
Air China staff told local media that the flight returned to the Beijing airport at 12:27pm, about 40 minutes after take off.
Travellers were delayed for around five hours as the flight departed again from Beijing at 3.30pm (7.30am UK time) and arrived in Chengdu at 6pm.
Watch the video below:
Top Stories