A livestock guard who was injured in the attack on innocent people by herdsmen in Benue, has said his wife and kids are missing. 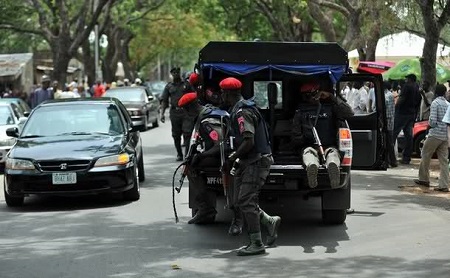 Men of the Nigeria Police Force
Mr Akpenheen Amile, a Livestock Guard, who is being treated of gunshots sustained in the January 2 attack on villages in Guma, Benue State, says he is yet to establish contact with his four wives and 18 children.
“I am in physical pains from gunshot injuries, but such pains don’t hurt me like the inability to ascertain the fate of my four wives and 18 children,” Amile told the News Agency of Nigeria (NAN) on Wednesday in Makurdi.
NAN reports that five villages in Guma and Logo Local Governments were attacked by unknown gunmen on Jan. 1 and 2.
According to the Benue State Emergency Management Agency (SEMA), 73 people have so far been confirmed killed by the invaders.
Amile, who is married to five wives, told NAN that only his fifth wife was with him.
The livestock guard, who is being treated at the Benue State Teaching Hospital (BSUTH), said that he was shot on one of his legs.
“I am physically in pains, but I am more worried about the psychological pains caused by the disconnection with my family.
“As it is, I don’t know whether they are among the dead or they have fled to some unknown destination for safety,” he said.
Amile, who claimed that the attackers were dressed in herdsmen attire, said that they arrived “around 5 p.m. and started shooting anyone on sight”.
Speaking through an interpreter, Amile said that he was with other Livestock Guards employed by the Benue Government to enforce the anti-open grazing law, when the gunmen descended on them.
“We were at our camp at a primary school at Iwer, in Guma, when the gunmen sorrounded us and started shooting.
“It was while I was running for safety that I was shot on the leg. We had to flee because we were not armed. Besides, we were taken by surprise.
“They killed many Livestock Guards and many of us were wounded.
“Since the attack, I have not heard from my four wives and 18 children. Only my fifth wife is here with me. This is causing me sleepless nights; the situation is unbearable,” he said.
Top Stories