Cee-C was captured on camera on Wednesday hurling insults to her former love interest and fellow contestant, Tobi Bakre, in explosive videos making the rounds online. 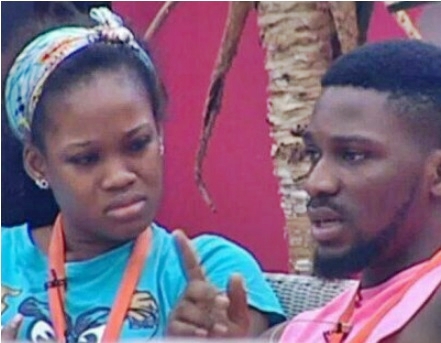 Cee-C and Tobi
The ongoing Big Brother Naija reality television show was on Wednesday lit up by controversial female housemate, Cee-C, who attacked her estranged in-house boyfriend, Tobi, and said that the young man has nothing to offer.
According to the videos which has started to make the rounds online, Cee-C can be seen raining curses and insults at an unperturbed Tobi who went on to lay on the couch
Trouble started when Tobi  who has recently not been in good terms with Cee-C blotted out that he doesn't like her anymore. This statement then got Cee-C sparking and ranting several insults at the University of Lagos graduate.
Continuing her rants, Cee-C warned Tobi to steer clear of her because she is completely over him, while also insisting that Tobi has nothing to offer her.
See the videos below courtesy of @ThatGidiGirl: