Over 13 worshipers were yesterday slaughtered by rampaging herdsmen who invaded a church in Benue State. 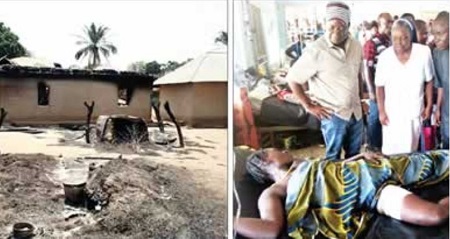 Scenes of the March 5 Benue killing in which 24 people -- including children -- were murdered (File photo)
Rampaging herdsmen have continued the massacre of innocent humans after attacking St. Ignatius Quasi Parish Ukpor-Mbalom in Ayar-Mbalom community of Gwer East Local Government Area of Benue State, killing two Catholic priests and 13 other worshipers  on Tuesday.
Terver Akase, the Senior Special Assistant to Governor Samuel Ortom confirmed the incident.
”Armed herdsmen this morning in Mbalom, Benue State, slaughtered two catholic priests and 13 worshippers.” Terver Akase tweeted.
The attackers also burnt down over 100 houses during the attack and sacked the entire community, a report by Punch stated. The attack came barely four days after the murder of ten persons by herdsmen in Guma Local Government Area and the destruction of several  houses by men suspected to be military personnel in Naka, Gwer West Local Government Area of the state. 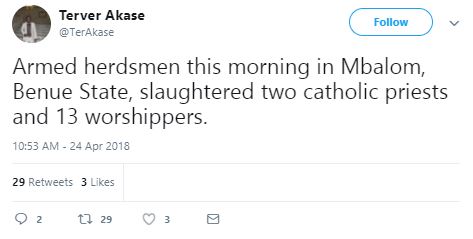 Most of the victims were attacked while coming from morning mass.
Another user, @BergerAlfred5 tweeted: ”MBuhari sponsored kinsmen Fulanis militia raided a village in Benue state killing 10 persons including two Revd fathers.”
Worried by the incessant killings, Governor Ortom recently cried out that the Federal government and the security agencies had abandoned his people and called on villagers to defend themselves with stones against the rampaging Fulani militia.
Top Stories