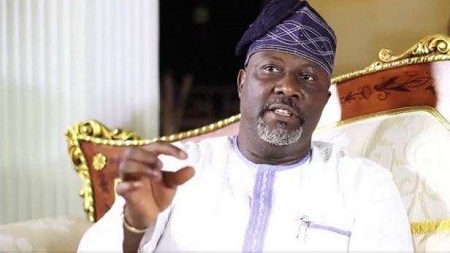 Senator Dino Melaye
There was pandemonium at the popular Area 1 roundabout Abuja when suspected thugs loyal to the embattled Senator Dino Melaye (APC, Kogi West) rescued him and whisked him to safety from the fully armed Special Anti-Robbery Squad.
The drama which began at 2.10 pm lasted for about six minutes with the suspected thugs in two Hilux pick up double-crossing the police escort, jerked up Melaye and threw him into one of the vans and speed off.
Commercial taxis and other motorists were caught unawares when the four vehicles carrying Melaye stopped at the middle of the road.
It was when some of the officers numbering over a dozen came down to transfer the senator, who was observed engaging in scuffles with the officers, into another vehicle that the crowd gathered.
Melaye was practically seen resisting his being moved into another vehicle, he later felled on the ground and was heard shouting, “You must shot me, you must kill me here, I am not going with you to Kogi or anywhere.”
Despite the efforts of three of the police officers to lift Melaye, wearing a brownish trouser and a shirt to match, he resisted kicking and engaging in scuffles even while on the ground. He was also not wearing a shoe.
It was at this time that three of the suspected thugs all wearing black vest and trousers struck from nowhere and lifted the Senator off the ground and threw him inside one of the vans which immediately sped off with passersby hailing him and shouting ‘Dino, Dino….’
The Police Officers who seemed paralyzed with shock could not instantly chase the fleeing van with their prized target.
It took some seconds for the officers to recover from the shock and sped after the van which took off to Finance-Berger junction in Zone 7 Area of the FCT. The Police Officers initially threaten to shoot anyone who dared to record the drama or take pictures with their phones and even charged at some passersby.
They however did not shot or arrest anyone. It was when they realized that some people at the upside of the junction were recording that they lower their guards and it was at that instance that Melaye was snatched from the ground and whisked away.
Melaye has been having a running battle with the Kogi State Governor, Yahaya Bello.
The embattled lawmaker’s house was besieged by the Police and it took several hours of interventions and negotiations before he submitted himself to the police outside his Maitama, Abuja, home.
He had claimed that the team of mobile and regular police officers, who arrived to arrest him at Monday afternoon, wanted to kill him, insisting he had done nothing wrong.
The police said they were after Melaye for allegedly arming deadly criminal gangs and convening a political rally that ended with the death of at least one person.
He was also accused of providing false statement to the police when implicated the chief of staff to Kogi governor in an alleged attempt to assassinate him last year.
Mr Melaye denied the allegations, saying his ordeal was largely because of his outspoken stance against alleged impunity in the country.
He also accused his state governor Yahaya Bello, as the mastermind of his predicament, a claim the governor denied. Mr Bello said Mr Melaye should face the consequences of his actions.
Source: Daily Trust
Top Stories