"Science Created Birth Control Pill For The Wrong Gender, It Should Have Been Made For Men And Not Women" - Eric Benèt

A True Hero: See How This Man Scaled Tall Building To Rescue A Child Dangling From A Balcony (Video)


A man has risked his life as he scales a tall building to save a helpless child who was dangling from a balcony. 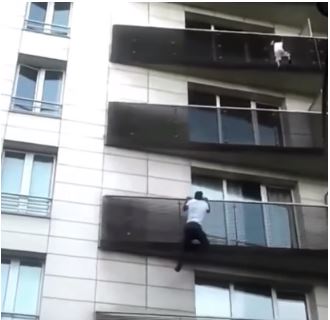 The man risked his life to save the child
Mamoudou Gassama, 22-year-old man recently took a great risk by scaling a building in Paris to save a young child dangling from a balcony, The Guardian reports.
Video shows him climbing up four floors of the apartment building in just seconds to rescue the child who was hanging precariously from the top of the apartment at about 8pm on Saturday.
By the time Parisian emergency services arrived at the building on rue Marx Dormoy in the 18th arrondissement of the French capital to help the child suspended in mid-air, Mamoudou had already pulled the child to safety.
Footage posted on social media shows a transfixed crowd gathered beneath the scene cheering and whooping as the migrant risked his life to rescue the child. The video has been viewed more than two million times on social media.
Mamoudou has now been hailed as a hero for his action, without which the boy would most likely have been injured. The young man suffered scratches from scaling the building and by the time firefighter attended to him and the child, they were both suffering from shock.
Speaking to BFM TV after the rescue, Mamoudou said he had been in the neighborhood to watch a football match in a local restaurant when he saw the commotion.
"I like children, I would have hated to see him getting hurt in front of me. I ran and I looked for solutions to save him and thank God I scaled the front of the building to the balcony," he said.
Mamoudou's brave act caught the attention of French leaders, including French President Emmanuel Macron. Macron congratulated the young migrant and has invited him to the Elysee Palace on Monday to personally thank him.
Paris Mayor Anne Hidalgo said on her official Twitter on Sunday she had called Mamoudou to thank him, congratulating the Malian migrant on his act of bravery.
"He explained to me that he arrived from Mali a few months ago with the dream of making a life for himself here. I replied that his heroic act is an example for all citizens and that the City of Paris will obviously be keen to support him in his efforts to settle in France," she posted to Twitter.
Watch the heroic video below.
Top Stories