A Nigerian man has taken to social media to narrate his encounter with a Lebanese man manhandling one of his staff and decided to record it. 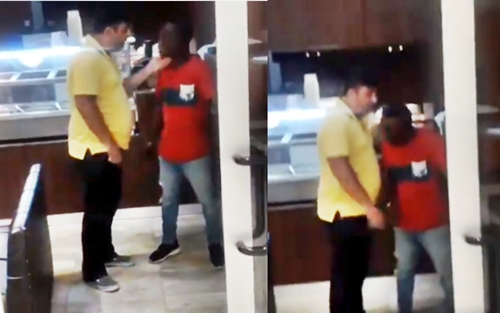 The lebanese man allegedly assaulting his staff
A Twitter user identified as Ajibola (@madejibo), has taken to the social networking platform to reveal how he was allegedly assaulted by a police oficer after he witnessed and recorded a Lebanese man mistreating one of his staff at the Novare mall in Lekki, Lagos.
According to him, when the Lebanese man noticed what he was doing, he called the security men who later alerted a policeman close by, adding that the policeman alleged slapped him first without asking questions and made him deleted the video, saying it was a crime against the law of the land.
Here's how he narrated the story on social medi:
*************
"On the 20th of July, 2018, I came into Novare Mall to watch a movie Lara and the Beats at about 830pm. Ater the movie, on my way out, I noticed a Lebanese man in HandH restaurant and cafe ill treating a Nigerian and I brought out my phone to record.
The Lebanese man saw me and accosted me with the sole aim of seizing my phone. I tried to resist but he over powered me. At this point, a group of security men came including a man who introduced himself as the Chief Security Officer (CSO).
The CSO ordered I handed over the phone to him but I blatantly refused. He sent a guard to call the police. A policeman came and without listening to my side of the story gave me a deafening slap and dragged me by my trousers (like a criminal) to a police post within the premises
I was forced by the police, Novare's security and the Lebanese man to delete the video from my phone. The staff that was been beaten by the Lebanese was cajoled to say that the Lebanese man was only playing with him.
Under so much duress by the police I was told to write a statement which was dictated to me. For the fear of my safety, I complied. The Lebanese man also claimed that I cut his wrist watch strap, but in the video, he had no wristwatch on while he was beating the staff.
The police said for taking the video I had done something criminal according to the law of the land. I was left to go around 1230am.
On my way to my car the Lebanese man tried to offer me money but I refused. After driving to safety by a stroke of thought, I recovered the video and posted it on Instagram.
I was thoroughly harassed in Novare Mall, a place I come to practically everyday to shop. I have also reported this incident to people in case I am attacked in the nearest future for putting out the video. #lebanesebrutality #Novarelekki."
Watch the video below;