It has been revealed that thousands of Nigerian medical doctors are presently working in South Africa after leaving for better opportunities. 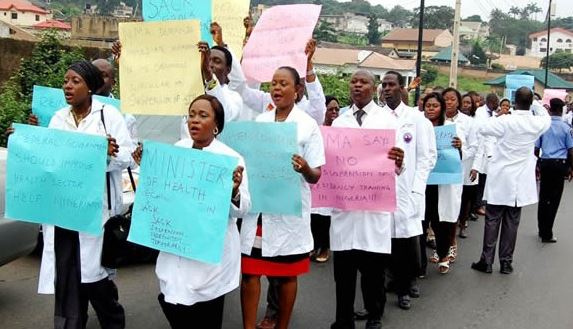 File Photo
The Consul General (CG) of Nigeria in South Africa, Mr. Godwin Adama, has said there were 5,000 Nigerian Medical practitioners working in various teaching, public and private hospitals in South Africa.
The Vice Consul, Information and Culture, Mr David Abraham, said in a statement on Monday in Abuja.
Abraham quoting Adama as saying when Nigerian Doctors’ Forum South Africa, led by its Secretary General, Dr Emeka Ugwu, visited him in Johannesburg.
“This shows that virtually every hospital in South Africa has a sizeable number of Nigerian Doctors; and this include teaching, public and private hospitals.
“What this means is that Nigerian Doctors and other professionals are constantly adding value to the system and this cannot be over-emphasised.’’
According to him, South Africa is replete with many Nigerian professionals who are contributing to the economic development in both public and private sectors in the country.
“Unfortunately, this has been either not reported at all or grossly under-reported.
“It is in this light that Nigerian professionals in South Africa have determined that they will no longer sit by and allow their numerous contributions undermined and eroded by negative publicity,” he said.
He said that Nigerian Doctors in South Africa had been involved in Medical Outreaches, where they rendered health services to the less privileged members of the society, particularly the Nigerian nationals.
Adama said that the Consulate would continue to celebrate Nigerian Medical Doctors and other professionals in South Africa.
He reiterated that the Consulate would continue to partner with all Nigerian Associations in South Africa to advance the wellbeing and welfare of Nigerians.
“We therefore, use this medium to call on all our nationals to emulate the professionals and continue to be law abiding,” he said.
The Secretary General of the Forum earlier informed the Consulate about their activities and the need to continue to render improved services in the South African health sector.
Ugwu expressed satisfaction with the current improved service delivery at the Consulate and urged the Consul General not to relent on his efforts.
According to him, the Forum is currently planning to expand this gesture, in partnership with the Nigerian Missions, to cover as many South Africans as possible to foster good neighbourliness between the two countries.
Ugwu said the President of the Forum, Prof. Olalekan Ayo-Yusuf could not make it due to exigencies of duty.
“Ayo-Yusuf is currently the Deputy Vice Chancellor of Sefako Makgatho Health Science University, South Africa,” he said.
Top Stories